Shares of Ligand were up 1.6% following the results. The company’s shares have gained 14.2% so far this year compared with the industry’s 3.7% increase. 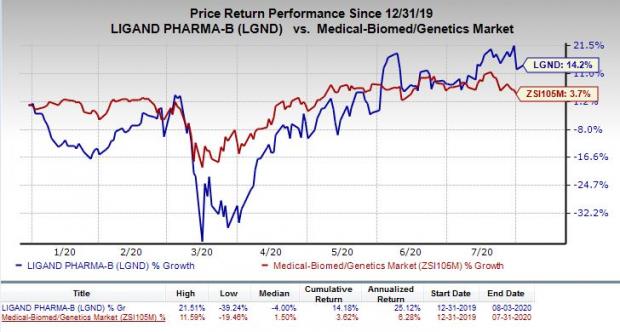 Royalty revenues were $7.2 million in the second quarter compared with $6.6 million in the year-ago quarter. Ligand primarily earns royalties on sales of Amgen's (AMGN - Free Report) Kyprolis and Acrotech Biopharma’s Evomela, which were developed using its Captisol technology.

Captisol sales were $24.5 million compared with $8.5 million in the year-ago quarter. The significant increase was due to higher sales of Captisol to support availability of Gilead’s (GILD - Free Report) remdesivir as a treatment for patients with severe COVID-19. The drug received FDA’s Emergency Use Authorization on May 1. Based on Ligand’s current outlook, it plans to increase annual production capacity of Captisol more than eight-fold next year.

Contract revenues were $5.2 million in the second quarter compared with $5.3 million a year ago. The company recorded Service revenue of $4.6 million, almost flat year over year.