Home Bancorp, Inc. (HBCP - Free Report) announced a new share repurchase plan on Monday, following which the company’s shares gained almost 3%, reflecting investors’ optimism. The board of directors approved the repurchase of up to 444,000 shares of the company’s common stock.

The new repurchase plan will commence after the completion of the 2019 plan, which currently has 21,063 shares remaining to be repurchased.

Repurchases can be executed either through the open market or privately-negotiated transactions, depending on the market conditions and other factors. The 2020 plan does not have any time limit and may be suspended or discontinued at any time.

Recently, it announced a quarterly dividend of 22 cents per share. The dividend was paid out on Aug 21 to shareholders of record as of Aug 10.

Apart from this, the company has been hiking its quarterly dividends from time to time. The last hike of 4.8% was announced in October 2019.

Over the past six months, shares of Home Bancorp have lost 25.3% compared with the industry’s decline of 18.9%. 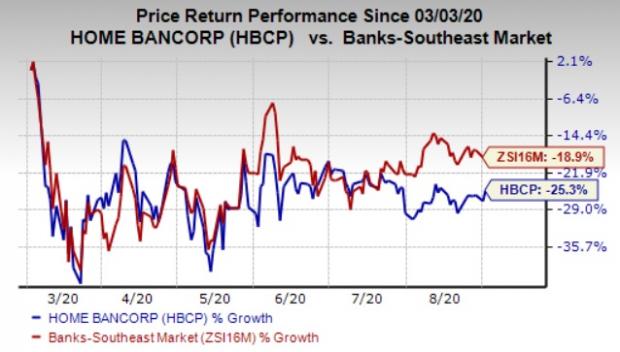 MVB Financial announced that it would repurchase up to $5 million worth of outstanding common stock.

PennyMac Financial repurchased 6.9 million shares at a price of $34 per share from The BlackRock Foundation, the charitable arm of BlackRock, Inc., in June.

Jefferies Financial increased its buyback program to $250 million in January 2020, while in March, the company authorized an additional share repurchase of $100 million.