The Snapdragon 732G is designed to deliver immersive gameplay powered by an upgraded GPU and CPU compared with the preceding generation. Qualcomm stated that the SoC will first show up in a POCO smartphone. It has an X15 LTE modem, which offers outstanding LTE download and upload speeds in addition to Wi-Fi performance. The SoC features the same Qualcomm Kryo 470 CPU present in the Snapdragon 730G but with a bit higher clock speed.

Also, the Adreno 618 GPU offers a 15% improvement in graphics rendering. Qualcomm is one of the largest manufacturers of wireless chipset based on baseband technology. The company is focusing to retain its leadership in 5G, chipset market and mobile connectivity with several technological feats as well as innovative product launches. Qualcomm set a new benchmark for itself with the introduction of a game-changing 5G chipset for low-cost smartphones for the masses.

The San Diego, CA-based company is benefiting from its investments toward building a licensing program in mobile. Also, the company resolved a dispute with Huawei and inked a new long-term global patent license agreement.

Qualcomm’s shares have returned 62.4% in the past year compared with 29.3% growth of the industry. 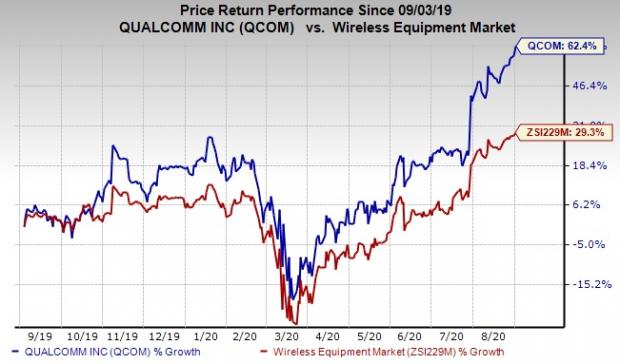 The company has a long-term (3 to 5 years) earnings growth expectation of 19.8% compared with the industry’s 15.2%. It has a trailing four-quarter earnings surprise of 14.3%, on average.

Turtle Beach has a trailing four-quarter earnings surprise of 41%, on average.

Vocera has a trailing four-quarter earnings surprise of 130.3%, on average. The company’s earnings beat the Zacks Consensus Estimate in three of the last four quarters.

Acacia has a trailing four-quarter earnings surprise of 39.4%, on average. The company’s earnings topped the consensus estimate in three of the last four quarters.