Shares of Smartsheet Inc. (SMAR - Free Report) have lost 18.6% since the company announced second-quarter fiscal 2021 results on Sep 2, primarily owing to broader sell off in the market witnessed on Sep 3 and Sep 4.

Revenues surged 41% year over year to $91.2 million and surpassed the Zacks Consensus Estimate by 5.6%. Management had anticipated revenues between $86 million and $87 million. The year-over-year increase in revenues was driven by strong momentum for Smartsheet’s offerings courtesy of higher demand for robust data collection and risk assessment capabilities amid the ongoing coronavirus pandemic. 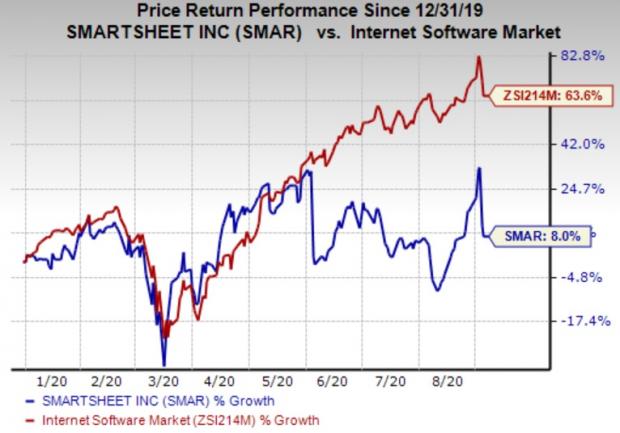 Notably, on a year-to-date basis, shares of Smartsheet have returned 8%, compared with industry’s rally of 63.6%.

Calculated Billings in the reported quarter increased 22% year over year to $97.3 million. Management had anticipated revenues Calculated billings to grow 15-17% year over year to $91-$93 million. Better-than-expected billings performance was driven by consistent improvement in purchases from customers through the reported quarter. Quarterly and multi-year billings represented about 3% of total billings reported in the quarter.

Non-GAAP gross margin remained flat on a year-over-year basis at 82%.

Smartsheet expects revenues between $94 million and $95 million for third-quarter fiscal 2021. This indicates year-over-year growth of 31-33%. The Zacks Consensus Estimate for revenues is currently pegged at $92.6 million.

Non-GAAP operating loss is expected between $28 million and $26 million, while non-GAAP net loss is expected to be 23-22 cents per share. The Zacks Consensus Estimate for bottom line is currently pegged at loss of 14 cents.

Moreover, net free cash outflow is estimated to be $10 million to $8 million.

For fiscal 2021, Smartsheet tweaked guidance. The company now anticipates revenues between $367 million and $373 million that indicates year-over-year growth of 35-38%. Earlier, management had projected revenues in the range of $360-$370 million. The Zacks Consensus Estimate for revenues is currently pegged at $364.5 million.

Non-GAAP net loss is now expected between 54 cents and 49 cents, compared with previously guided loss of 54-45 cents. The Zacks Consensus Estimate for bottom line is currently pegged at loss of 50 cents.

Management anticipates closing the acquisition worth approximately $155 million in late September. Brandfolder is projected to rake in approximately $2 million to revenues and $6 million to billings in fiscal 2021.

Long-term earnings growth rate for Apple, Blackbaud, and Analog Devices is currently pegged at 10.7%, 7.6%, and 13.3%, respectively.

Here's Why You Should Buy Horace Mann Educators (HMN) Stock