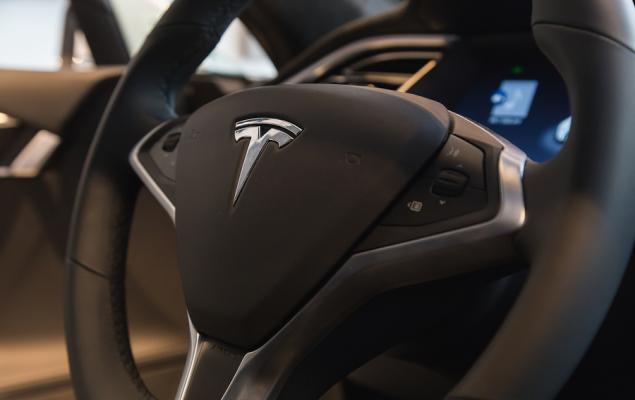 Tesla’s (TSLA - Free Report) shares cratered around 21% yesterday to close the session at $330.21, marking the biggest daily percentage drop on record, as the company missed out on inclusion in the S&P 500 Index. Expectations of Tesla’s addition to the S&P 500 list was quite high after the company reported the fourth consecutive quarterly profit in July, which made it eligible to be included in the elite index.

In fact, the possibility of its inclusion in the blue-chip index was a major driver of the company’s insane rally of late. Shares had been bidding up ever-higher partly on the expectation that the major index would be including the electric car giant, which would have put it in position to be picked up by various ETFs and other funds that track indexes, thus leading to more shares bought overall.

Nonetheless, the red-hot electric vehicle maker was dismissed by the S&P 500 committee, which instead decided to add arts and crafts marketplace Etsy, testing equipment maker Teradyne, and pharmaceutical firm Catalent as a part of the quarterly reshuffle. Various speculations have been made as to why the company couldn’t make it to the S&P 500 list.

Questions have been raised about the automaker's profitability calculation method, as a major portion of it came from selling regulatory credits to other carmakers. The reliance on these credits implies that bulk of Tesla’s profits resulted from regulatory arbitrage and not from manufacturing and selling cars. Others view that the firm’s relentless rally in share price could have also played spoilsport. Tesla’s crazy run on the bourses of late had pushed its valuation to lofty levels despite cash burn concerns. Recently, Tesla’s market capitalization soared higher than the combined value of several auto biggies including Toyota, Volkswagen, General Motors, Ford (F - Free Report) and Fiat Chrysler. With such high market cap, the stock would have provided unjustifiable weightage to the company’s sector on the index.

Notably, Tesla split its shares in a 5-for-1 exchange at the end of the last month. On Sep 1, it announced its intention to raise up to $5 billion via share offering, capitalizing on the recent 5-for-1 stock split, which made the shares more affordable for individual investors. Yesterday, the company announced that it has completed $5 billion capital raise through equity financing. While equity financing could lead to initial share price decline as it dilutes the stock's value for the existing shareholders, the firm aims to use the proceeds to solidify financials. The capital raise is also timely as the company is busy with expansion plans including investments in new factories.

Nonetheless, Tesla still has a lot going in its favor including robust Model 3 demand, ramp up of Model Y production, Shanghai Gigafactory success, ambitious Berlin Gigafactory, amazing line-up of upcoming products and aggressive expansion efforts. It will also be interesting to see how the stock trades in the coming days ahead of its Battery Day on Sep 22.

While the company missed out on S&P 500 inclusion this time around, there’s still plenty of optimism surrounding the company and it might get added to the index in the next quarterly rebalance. Presently, Tesla carries a Zacks Rank #3 (Hold). You can see the complete list of today’s Zacks #1 Rank (Strong Buy) stocks here.