Curtiss-Wright Corporation (CW - Free Report) has recently signed an agreement with Pacific Star Communications, also known as PacStar, to acquire the latter’s stock for $400 million in cash. The acquisition is expected to close in the fourth quarter of 2020, subject to regulatory approvals and other closing conditions.

How Will Curtiss-Wright Benefit?

From the perspective of Curtiss-Wright’s Chairman and CEO David C Adams, the acquisition of PacStar will be instrumental in establishing the acquirer as a critical supplier of advanced tactical and enterprise network communications solutions supporting a broad spectrum of high-priority U.S. military force modernization programs.

On completion of the acquisition formalities, PacStar will operate within Curtiss-Wright's Defense segment and is expected to generate sales of more than $120 million by the end of 2020. PacStar is also expected to be accretive to Curtiss-Wright's adjusted diluted earnings per share in its first full year of ownership and produce a strong free cash flow conversion rate well in excess of 100%.

From a long-term perspective, the acquisition is expected to support Curtiss-Wright’s financial objectives for long-term profitable growth and strong free cash flow generation within its capital allocation strategy.

Rationale Behind the Deal & Other Acquisitions

In recent times, mergers and acquisitions have become a pivotal strategy for defense majors to expand into new markets, gain new capabilities and access emerging technologies. Moreover, rising focus on cost-reduction initiatives, widespread competition and the need for increased control over production procedures have prompted defense industry giants to engage in rampant mergers and acquisitions.

We believe that the latest acquisition deal signed by Curtiss-Wright has also been influenced by these factors. Influenced by similar factors, we have witnessed a handful of other mergers and acquisitions among defense players in recent times. Notably, Raytheon Company completed its merger with United Technologies in April 2020, to form Raytheon Technologies (RTX - Free Report) , creating the world's most advanced aerospace and defense systems provider.

In the same line of strategy, Leidos Holdings (LDOS - Free Report) completed the acquisition of L3Harris Technologies' (LHX - Free Report) Security Detection and Automation businesses, for approximately $1 billion in cash in May 2020. This deal is expected to have expanded the acquirer’s scope and scale in securing ports and borders and enhancing passenger movement in airports, thereby fortifying infrastructure for national security and public venues.

Shares of the company have gained 3.8% in the past three months against the industry’s decline of 4.1%. 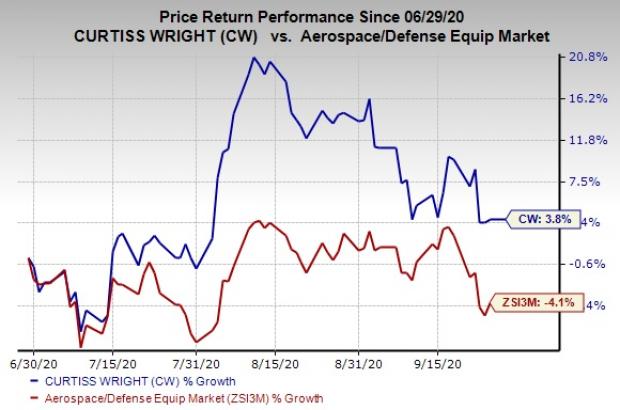