Ralph Lauren reported adjusted earnings per share of $1.44 in the fiscal second quarter, exceeding the Zacks Consensus Estimate of 94 cents. The bottom line also compares unfavorably with adjusted earnings of $2.55 reported in the prior-year quarter.

Net revenues declined 30% year over year to $1,193.5 million and missed the Zacks Consensus Estimate of $1,220 million. On a constant-currency basis, revenues were down 31% from the prior-year quarter. Soft revenues mainly resulted from lower sales across all regions, stemming from supply-chain disruptions related to COVID-19. Meanwhile, currency movements favorably impacted the top line to the tune of nearly 100 basis points (bps).

Apart from these, digital revenues grew in mid-teens year over year and saw double-digit growth in all regions.

North America: During the fiscal second quarter, the segment’s revenues declined 38% from the year-ago quarter to $543 million. The retail channel in the region witnessed a 32% slump in comparable store sales (comps) and a 40% decrease in brick-and-mortar stores, partly offset by a 10% rise in digital commerce. Revenues from the North America wholesale business plunged 46% from the prior-year period.

Europe: The segment’s revenues fell 25% year over year to $359 million, with a 28% decline in currency-neutral revenues. Comps at retail stores in Europe declined 29% due to a 35% decrease in brick-and-mortar stores, somewhat offset by 26% growth in the digital platform. Revenues for the segment’s wholesale business fell 23% on a reported basis and 27% at constant currency.

Asia: The segment’s revenues decreased 7% year over year to $237 million on a reported basis and 8% on a currency-neutral basis. Comps in Asia dropped 11% due to a 12% decrease in brick-and-mortar stores, which is more than offset by a 32% rise in digital operations in the quarter.

Ralph Lauren ended the quarter with cash and short-term investments of $2,012 million, total debt of $1,631 million and total shareholders’ equity of $2,544.1 million. Inventory dropped nearly 12.4% from a year ago to $887 million at the end of the quarter.

Moving on, this Zacks Rank #3 (Hold) company is on track with the transition of the Chaps brand, which is in sync with its long-term brand elevation strategy. In this context, it has entered into a multi-year licensing deal with an affiliate of 5 Star Apparel LLC, a division of the OVED Group, to be effective from Aug 1, 2021. Per the deal, 5 Star Apparel will manufacture, market and distribute men’s and women’s products of the Chaps brand. Also, this deal will help Ralph Lauren focus better on its core brands and reduce dependence on North American stores.

In the past three months, shares of this company have lost 40.5% compared with the industry’s decline of 10.5%. 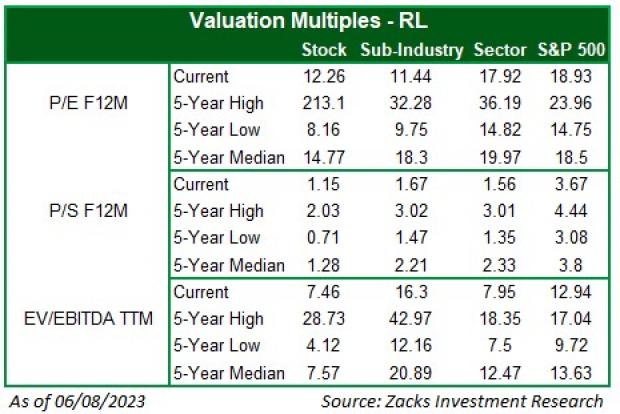