Adjusted earnings of 72 cents per share beat the Zacks Consensus Estimate by 9.1% but decreased 1.4% year over year. Revenues of $1.39 billion beat the consensus mark by 0.7% but declined 1.6% year over year.

Acquisitions contributed $44.2 million to revenues in the reported quarter.

So far this year, shares of Waste Connection have gained 8.8% compared with 19.3% decline of the industry it belongs to. 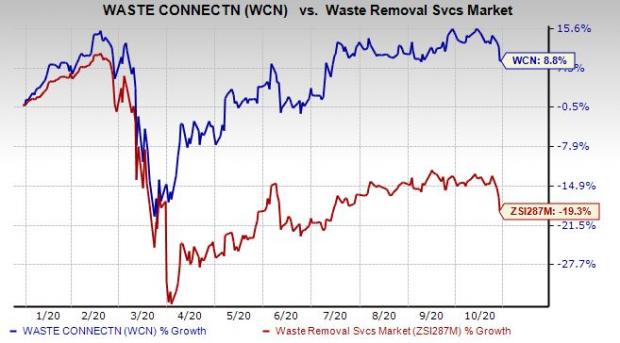 Solid Waste Disposal and Transfer segment revenues decreased 1.9% from the year-ago quarter to $311.6 million. The segment contributed 22.4% of total revenues.

Intermodal and Other segment revenues increased 2.6% to $27.1 million. The segment accounted for 2% of total revenues.

Waste Connections’ board of directors approved a dividend hike of 10.8%, reflecting its 10th consecutive double-digit percentage increase since the initiation of dividend payment in 2010. The company paid out dividend of $49 million in the reported quarter.