Halozyme Therapeutics, Inc. (HALO - Free Report) reported third-quarter 2020 earnings of 25 cents per share, beating the Zacks Consensus Estimate of 20 cents. The company had reported a loss of 17 cents in the year-ago quarter.

Shares of Halozyme were up 7.7% in after-market trading on Nov 2, following the earnings release. The stock has gained 83.8% so far this year compared with the industry’s 1% increase. 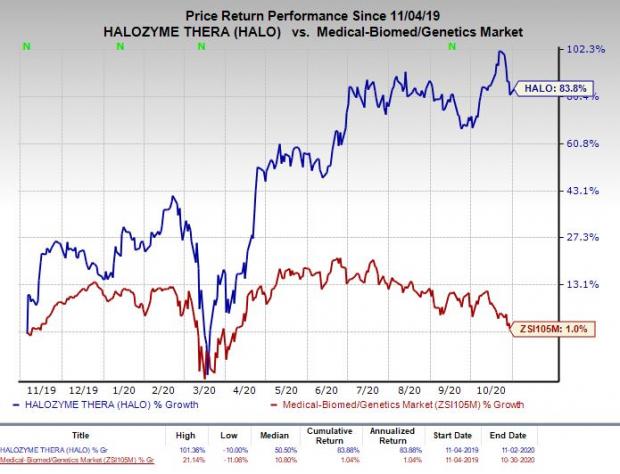 Royalty revenues were $23.9 million in the third quarter, up 44.1% from the year-ago quarter mainly driven by strong uptake of J&J’s (JNJ - Free Report) subcutaneous Darzalex (Darzalex SC) in multiple myeloma patients, which was launched during the second quarter. However, royalties were hurt due to lower sales of matured partnered drugs like Rituxan Hycela and Herceptin Hylecta due to biosimilar competition.

Product sales, solely from the sale of bulk rHuPH20 to collaborators using the ENHANZE platform for drug development, decreased 69% to $9 million in the third quarter. In the prior-year quarter, the company had recorded a bulk sale to J&J.

Revenues under collaborative agreements were $32.3 million compared with $0.4 million in the prior-year quarter. The significant increase was due to the company’s recognition of expected milestone payments from Roche and argenx related to their pipeline progress.

Research and development (R&D) expenses declined 74.6% year over year to $7.7 million mainly due to discontinuation of oncology drug development efforts.

Selling, general and administrative (SG&A) expenses were $11.7 million, down 34.9% from the year-ago period. The decline was due to lower compensation and commercial-related expenses as a result of a restructuring initiatives announced last year.

The company repurchased its own common stock worth $58.9 million during the third quarter.

In September, Takeda’s subcutaneous formulation of Hyqvia received approval for label expansion in Europe to include adults, adolescents and children with an expanded range of secondary immunodeficiencies. J&J also filed a label expansion for Darzalex SC in the same month to include light chain amyloidosis.

Meanwhile, the company stated on its earnings call that six clinical studies are expected to be initiated by its partners in the rest of 2020.

Halozyme raised its view for revenues and earnings for 2020. The company expects total revenues in 2020 to be between $250 million and $260 million compared with $230 million and $245 million previously expected. The guidance indicates year-over-year growth of 28-33%. The revenues guidance includes royalties of $80-85 million, revenues under collaboration of $115-120 million, and product sales of $52-57 million.