The decision came in as part of the company’s investment plans of more than $3.2 billion in its North American manufacturing facilities to produce a line-up of new electric vehicles (EV) for commercial and retail customers. The latest development is also part of the company’s investment of more than $11.5 billion globally in electrification through 2022.

The all-electric E-Transit will debut on Thursday and enter the market in 2022.

Quest to be Fully Electric

Amid the heightening climate change concerns, the face of the auto industry is transforming and investors are intrigued by automakers which lower their global carbon emissions through green transportation. This has made it essential for automakers to reorient their business model and shift toward manufacturing EVs.

As a part of its EV game plan, Ford is expanding its foothold across North America. The company is using state-of-the-art technology to manufacture EVs, which deliver enhanced performance and productivity across its North American manufacturing facilities.

This September, Ford announced the decision to roll out the all-electric F-150 by mid-2022, which will be assembled at the new Rouge Electric Vehicle Center in Dearborn, MI. The electric van investment in Kansas City is in addition to the $300 million invested for the launch of the F-150 model at that plant.

Additionally, the company’s all-electric Mustang Mach-E will enter dealer showrooms next month. The new fleet of EVs reflects the auto biggie’s plan to electrify its classic and most renowned vehicles, with the goal to provide carbon-free transportation.

The Dearborn-based automaker has adopted a slightly different approach to becoming fully electric. It manufactures and retails economical electric vehicles in the heart of the retail and commercial market rather than building high-end luxury electric vehicles which can be afforded by few. The spectacular Mustang Mach-E crossover, the all-electric F-150 and the new E-Transit forms part of the company’s first swing of EVs in North America.

Ford is also doing a cash outlay of approximately $150 million in the Van Dyke Transmission Plant in Southeast Michigan to build e-motors and e-transaxles beginning 2021.

In addition to EV manufacturing sites for trucks and vans in the United States, Ford entered into a deal with Unifor in September involving the investment of $1.46 billion to introduce battery-powered electric vehicle production in its manufacturing facility in Oakville, Ontario, and a new engine derivative to Windsor, Ontario. This will be the first time ever that an automaker has produced full battery-powered electric vehicles in Canada for the North American market.

This is just the first phase of the company’s long-term goal with more new electric vehicles and more investment anticipated in the days to come.

Ford, with its robust, enticing and affordable electric vehicles, will symbolize the beginning of a new era for the auto industry. The company’s continued diligence and passion to electrify its models to keep in pace with the changing needs of the auto sector will pave the way for its profitable future. 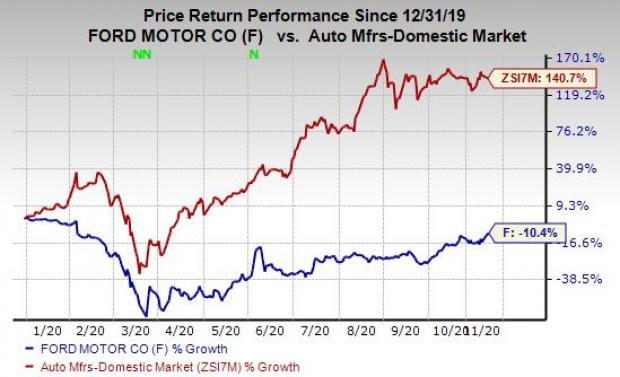