Sempra Energy (SRE - Free Report) recently announced that its subsidiaries, Sempra LNG and IEnova, have approved a fresh investment worth $2 billion for construction of Mexico’s ECA LNG Phase 1 project. This is the only liquefied natural gas (LNG) export project globally to reach a final investment decision to date this year.

In total, Sempra Energy aims to spend almost $2.5 billion at the Energía Costa Azul (ECA) regasification terminal, for now, which includes $2 billion for the mid-scale Phase 1 project and $400 million for new pipeline in Mexico.

ECA LNG Phase 1 is one among the first U.S.-Mexico cross-border initiatives following implementation of the United States-Mexico-Canada Agreement. It is also expected to be the first LNG-export terminal on the Pacific coast to connect the abundant natural gas supplies of the U.S. Western states, including Texas, Wyoming, Utah and New Mexico, to markets in Mexico and countries across the Pacific Basin.

With incremental customers adopting cleaner energy, this project will surely attract energy providers’ interest and will be able to serve customers across a vast region. Notably, ECA LNG has already clinched 20-year sales and purchase agreements from Mitsui & Co., Ltd. and an affiliate of Total SE (TOT - Free Report) for the purchase of approximately 2.5 million tons per annum (Mtpa) of LNG from ECA LNG Phase 1.

We expect more such agreements in the near future that in turn will add to Sempra Energy’s profits.

We expect Sempra to play an important role in the United States achieving the aforesaid target, with the second and third trains of its Cameron LNG facility set to come into service by the end of 2020. Notably, the company is engaged in advance commercial discussions with potential partners for its LNG development projects. In March 2020, the company finalized an engineering, procurement and construction (EPC) contract with Bechtel Corporation for its proposed Port Arthur LNG liquification project.

In August, Phase 1 of the Cameron LNG export facility in Louisiana reached full commercial operations under Cameron LNG's tolling agreements, which marked the start of full run-rate earnings and cash flows. Sempra Energy's share of full run-rate earnings from the Phase 1 of this project is expected between $400 million and $450 million annually, with no commodity or volumetric exposure.

Other LNG Players to Watch

Notably, Cheniere Energy, the nation’s biggest LNG producer, revealed its plans to complete Train 6 at Sabine Pass in Louisiana in the second half of 2022 and is on track to finish Train 3 at Corpus Christi in Texas in the first half of 2021 (as stated by a Reuters report).

Sempra Energy’s stock has lost 10.1% in the past year compared with the industry’s decline of 22.5%. 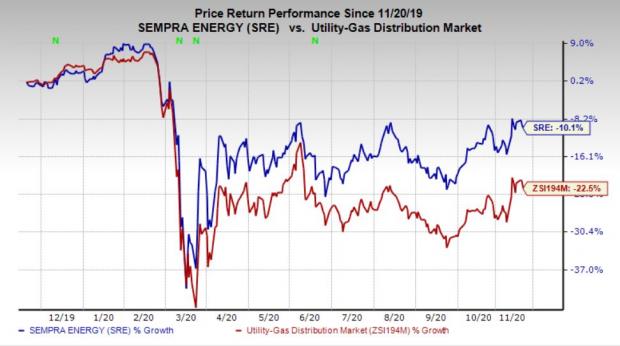