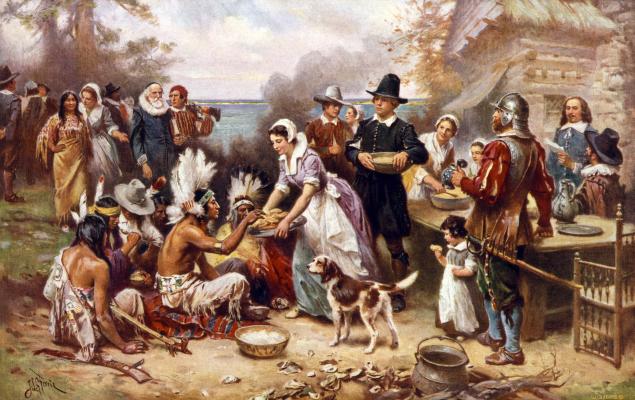 The History Behind a Day of Thanksgiving: Global Week Ahead

In the Global Week Ahead, on Thursday, rests the national U.S. holiday of Thanksgiving.

In light of that, I decided to consult history.com.

I reproduce their brief but official version; a story hailing from the eventual state of Massachusetts; then expanding into a continental United States story of celebration.

It’s for a global audience.

Most adults here in the ‘States have memory of some or all of this story.

In September 1620, a small ship called the Mayflower left Plymouth, England, carrying 102 passengers—an assortment of religious separatists seeking a new home where they could freely practice their faith and other individuals lured by the promise of prosperity and land ownership in the New World.

After a treacherous and uncomfortable crossing that lasted 66 days, they dropped anchor near the tip of Cape Cod, far north of their intended destination at the mouth of the Hudson River. One month later, the Mayflower crossed Massachusetts Bay, where the Pilgrims, as they are now commonly known, began the work of establishing a village at Plymouth.

Throughout that first brutal winter, most of the colonists remained on board the ship, where they suffered from exposure, scurvy and outbreaks of contagious disease. Only half of the Mayflower’s original passengers and crew lived to see their first New England spring.

In March, the remaining settlers moved ashore, where they received an astonishing visit from an Abenaki Native American who greeted them in English.

Several days later, he returned with another Native American, Squanto, a member of the Pawtuxet tribe who had been kidnapped by an English sea captain and sold into slavery before escaping to London and returning to his homeland on an exploratory expedition.

Squanto taught the Pilgrims, weakened by malnutrition and illness, how to cultivate corn, extract sap from maple trees, catch fish in the rivers and avoid poisonous plants.

He also helped the settlers forge an alliance with the Wampanoag, a local tribe, which would endure for more than 50 years and tragically remains one of the sole examples of harmony between European colonists and Native Americans.

In November 1621, after the Pilgrims’ first corn harvest proved successful, Governor William Bradford organized a celebratory feast and invited a group of the fledgling colony’s Native American allies, including the Wampanoag chief Massasoit.

“Our harvest being gotten in, our governor sent four men on fowling, that so we might after a special manner rejoice together, after we had gathered the fruits of our labors; they four in one day killed as much fowl, as with a little help beside, served the Company almost a week, at which time amongst other Recreations, we exercised our Arms, many of the Indians coming amongst us, and amongst the rest their greatest king Massasoit, with some ninety men, whom for three days we entertained and feasted, and they went out and killed five Deer, which they brought to the Plantation and bestowed on our Governor, and upon the Captain and others. And although it be not always so plentiful, as it was at this time with us, yet by the goodness of God, we are so far from want, that we often wish you partakers of our plenty.”

Historians have suggested that many of the dishes were likely prepared using traditional Native American spices and cooking methods.

Because the Pilgrims had no oven and the Mayflower’s sugar supply had dwindled by the fall of 1621, the meal did not feature pies, cakes or other desserts, which have become a hallmark of contemporary celebrations.

Pilgrims held their second Thanksgiving celebration in 1623 to mark the end of a long drought that had threatened the year’s harvest and prompted Governor Bradford to call for a religious fast.

Days of fasting and thanksgiving on an annual or occasional basis became common practice in other New England settlements as well.

During the American Revolution, the Continental Congress designated one or more days of thanksgiving a year, and in 1789 George Washington issued the first Thanksgiving proclamation by the national government of the United States.

In it, he called upon Americans to express their gratitude for the happy conclusion to the country’s war of independence and the successful ratification of the U.S. Constitution.

His successors John Adams and James Madison also designated days of thanks during their presidencies.

(1) What to Make of a COVID Holiday Shopping Season?

Does a vaccine promise put U.S. consumers in a shopping mood? Retailers may have clues.

In a typical year, U.S. shoppers would be gearing up for “Black Friday,” the kick-off event for the holiday season. But this is 2020. Surging coronavirus cases make the familiar scenes of consumers crowding into stores to snap up bargains unlikely.

Oxford Economics expects holiday sales to rise only +0.6% from a year ago due to a confluence of COVID-19, suffering incomes and a weak job market. Macy’s expects a tough time with a possible 20% sales decline over the fall.

The Solactive-ProShares Bricks and Mortar Retail Store index slightly outperformed the S&P 500 this year, but that pales against a 70% jump at Amazon, the winner of the stay-at-home economy.

South Koreans are watching for a strengthening currency.

No one expects the Bank of Korea to do much about already record-low interest rates when it meets on Thursday.

Instead, all eyes are on currency markets, where the central bank is believed to be selling the won to stop it hitting 1,100 per dollar – a line that may bring pain to an economy riding on tech exports.

Other countries face a similar dilemma. Asia’s quick rebound from the pandemic and higher yields, coupled with a slower pace of investment and imports create a goldilocks-like balance of payments tailwind for currencies.

Authorities in Thailand and China are also actively massaging gains in the baht and yuan. Indonesia and the Philippines have used the opportunity to deliver surprise rate cuts this month.

(3) How Much Further Can Bitcoin Climb?

Many expect the rally to end in tears, as it did three years ago when bitcoin crashed 50% within a month.

Others differ: Calling it the new gold, Citi analyst Tom Fitzpatrick predicted bitcoin would soar past $300,000 within 12 to 24 months. Bitcoin fans cite improved market infrastructure, a greater mainstream investor presence and better liquidity for why they think this rally has legs.

While central banks are in full money-printing mode, bitcoin supply is capped. But it’s still a volatile, retail-dominated market with patchy regulation and frequent hacks.

For now, the bulls appear in command.

(4) European and USA Manufacturing PMIs Come Out on Monday

Flash readings of November business activity from Europe and the United States on Monday will reveal just how bad the damage was from the resurgent coronavirus and the restrictions imposed to contain it.

Having bounced off the initial COVID-19 trough, global PMIs are again teetering around 50 — the barrier between expansion and contraction.

The hit this time shouldn’t be as severe, with restrictions less harsh and businesses better prepared. But if market reaction to the latest weaker-than-expected U.S. data is anything to go by, investors may err on the side of caution until a vaccine is rolled out, fiscal stimulus in Europe and the U.S. is confirmed and signs of a rebound are entrenched.

Britain and the European Union are said to be on the verge of clinching a post-Brexit trade deal that would regulate their relationship after the transition period ends on Jan. 1, 2021 — six weeks away.

Diplomats say three sticking points remain and EU leaders are stressing the need to prepare for a no-deal. Brexit deadlines have come and gone several times in the past, but negotiators are making a final push and the consensus is London and Brussels will come to some sort of agreement - possibly a bare-bones deal with details to be decided down the line.

Recent gains in sterling and UK stocks imply assets are pumped up by hopes of a COVID-19 vaccine and a Brexit deal. They could be in for a rocky ride.

Here are the three large cap stock names that caught my eye this week.

(1) Baidu (BIDU - Free Report) : This is the Google of Mainland China. The share price trades at $137 and the market cap is now $47.2B. I note a Zacks Value score of C, a Zacks Growth score of C and a Zacks Momentum score of A.

(2) Fiat Chrysler : This is the automaker. Cars are hot with a COVID-threatened consumer. This stock trades at $15 a share and the market cap rests at $30.2B. That’s certainly not Tesla! I note a Zacks Value score of A, a Zacks Growth score of B, and a Zacks Momentum score of B.

(3) Laboratory Corp. of America (LH - Free Report) : This is a U.S. Medical-Dental supply company. Shares trade at $198 and the market cap is $10.3B. Still, the Zacks Value score is A, the Zacks Growth score is A, and the Zacks Momentum score is B.

This is a short 4-day trading week.

Wednesday will be the big day for macro data prints. Thursday is a national U.S. holiday. Friday will be very quiet, too.

On Monday, the Euro Area Markit Manufacturing PMI should be 53.1. Services should be 42.5.

On Tuesday, the German IFO indexes come out. I have Business Climate at 90.8, Current Assessment at 87.4, and Expectations at 93.8. Those might be better than you thought.

On Wednesday, U.S. GDP growth for Q3 should be +33.1% in an annualized preliminary reading. This is a backward-looking data set. Stocks won’t care about this.

The latest FOMC minutes come out.

On Thursday, this is a holiday in the USA. Thanksgiving Day.

On Friday, I will be watching the Baker-Hughes oil rig counts.

Emulating the original Pilgrim story, typically, Americans gather with family and friends on Thanksgiving Day for a feast.

This year, with the presence of COVID spreading faster amongst the USA population, the event is likely to produce much smaller gatherings, if gatherings even happen.

Next year, after the distribution of COVID vaccines — prompting a return to full mobility and a prosperous economy — may we Americans (and the world) properly celebrate Thanksgiving.

In turns out, that’s hewing closer to the original story, anyways.

Just for the record, one of my ancestors, whose first name was John, was on board the Mayflower.

There are an estimated 10 million living Americans — and as many as 35 million people worldwide — who descended from the Pilgrims, according to the General Society of Mayflower Descendants. 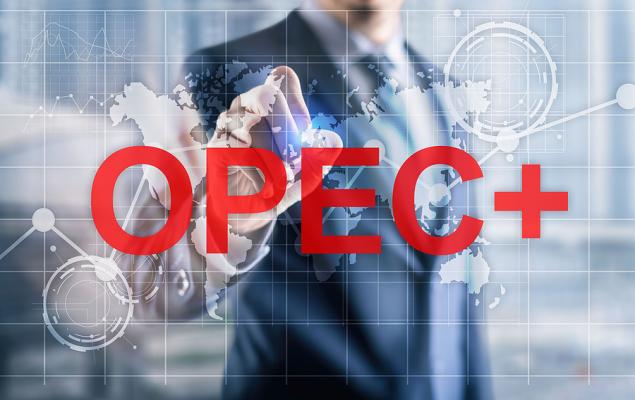