Valued at $4.8 billion, the contract is expected to get completed by Sep 30, 2030. Per the terms of the agreement, Northrop’s offerings will include engineering, studies and analyses; design, integration, test and evaluation; requirement and specification management; quality assurance and more.

Work related to the deal will be carried out in San Diego, CA.

Northrop’s Global Hawk is an unmanned surveillance aircraft, which provides military field commanders with high resolution, near real-time imagery of large geographic areas. Powered by a Rolls-Royce (RYCEY - Free Report) AE 3007 turbofan engine, these jets can fly for as long as 32 hours on one load of fuel.

Increasing geopolitical conflicts across borders worldwide have prompted nations to enhance their surveillance manifold and in this unmanned aerial vehicles (UAVs) like Global Hawk play a vital rol, since they offer service with minimum human casualties. Therefore, demand for unmanned surveillance jets is on the rise.

Such proactive approach of governments toward expanding their surveillance aircraft stocks has in turn bolstered the need for integration of the surveillance systems with latest Satellite Communication (SATCOM) network. The latest contract win by Northrop is a bright example of that.

To this end, it is imperative to mention that the global UAV market is projected to expand at a CAGR of 15.5% to reach $45.8 billion by 2025 from 2019, with increasing procurement of military UAVs by defense forces worldwide being one of the primary growth catalysts. Such impressive growth projections should usher in more such contract wins for Northrop, with the company being one of the major UAV manufacturers.

Other Players Worth Mentioning

Considering the growing demand for military surveillance across the globe, it is quite obvious that other major manufacturers like Boeing (BA - Free Report) and Lockheed (LMT - Free Report) will also benefit. Notably, Boeing’s P-8 is truly a multi-mission maritime patrol aircraft, which excels at anti-submarine warfare; anti-surface warfare; intelligence, surveillance and reconnaissance and search and rescue.

Lockheed’s U-2 Dragon Lady has been supporting the U.S. Air Force’s mission of superior surveillance for 65 years.

Shares of Northrop Grumman have slumped 11.8% in a year compared with the industry’s decline of 27.9%. 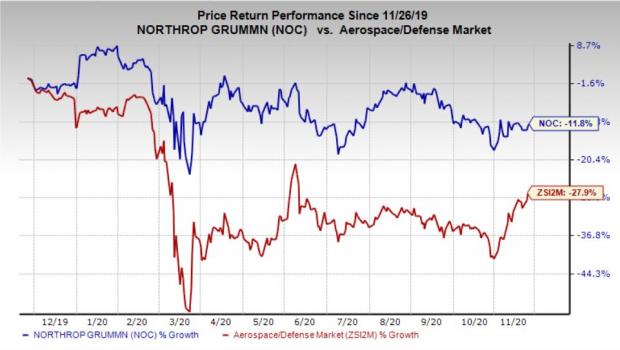