CRISPR (CRSP) Up on Promising Data for Gene Therapy CTX001

Notably, a single dose of CTX001 is being evaluated in the phase I/II CLIMB THAL-111 study for treating TDT and the phase I/II CLIMB SCD-121 study for severe SCD. New data from the studies showed that treatment with CTX001 resulted in all seven patients with TDT to remain transfusion independent at the last follow-up, while all three patients with SCD were free of vaso-occlusive crises through last follow-up. A total of 19 patients have been dosed with CTX001 across both programs.

The companies presented the abovementioned new data at the annual meeting of the American Society of Hematology. Meanwhile, the data was also published in the New England Journal of Medicine.

Shares of CRISPR Therapeutics were up 5% following the announcement of the news. In fact, the stock has skyrocketed 142.2% so far this year compared with the industry’s increase of 5.5%. 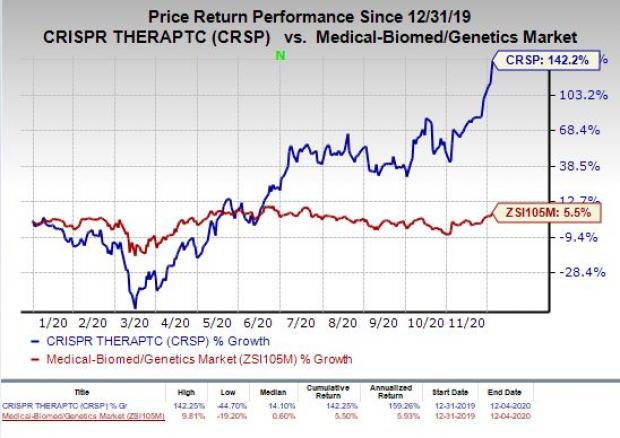 We remind investors that CRISPR Therapeutics and Vertex had entered into a strategic research collaboration in 2015 to co-develop and co-commercialize CTX001. Per the agreement, they equally share all R&D costs and profits worldwide.

Notably, CTX001 has been granted Regenerative Medicine Advanced Therapy ("RMAT"), Fast Track, and Orphan Drug designations by the FDA for both TDT and SCD. The European Commission has granted Orphan Drug Designation to the gene therapy candidate for both indications.

In September 2020, the European Medicines Agency (EMA) granted a Priority Medicines (“PRIME”) designation to CTX001 for the treatment of severe SCD.

We note that, other than CRISPR Therapeutics, companies such as Editas Medicine (EDIT - Free Report) , Intellia Therapeutics (NTLA - Free Report) and Beam Therapeutics, among others, are also using the CRISPR/Cas9 gene editing technology to develop their respective candidates for addressing various ailments.