On Dec 8, the company announced that all evaluable patients receiving 200 mg twice daily (BID) dose of CA-4948 in the AML/MDS study achieved marrow blast reductions with one-third of them achieving a marrow complete response. No dose-limiting toxicities were observed in the study. The company started enrolment in the 400 mg BID cohort of the study.

On Dec 7, Curis had announced preliminary data from the NHL study, evaluating seven different dosage regimens of CA-4948. The data demonstrated durable anti-cancer activity of single-agent CA-4948 therapy. The candidate achieved a mean reduction of 27% in tumor burden in six of seven evaluable patients. The candidate was also well-tolerated in patients. The company also announced 300mg BID dose of the candidate as the recommended dose for phase II study in NHL patients.

Shares of Curis were up 354.9% on Dec 8 as investors cheered the encouraging pipeline progress. The company’s shares have surged 285.3% so far this year compared with the industry’s rise of 5.8%. 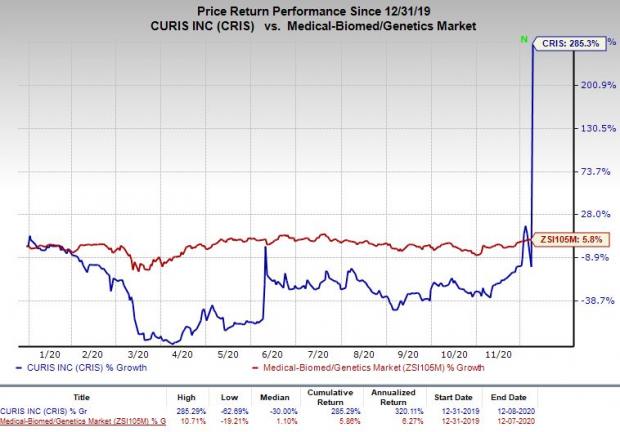 Apart from hematologic malignancies, the company is also developing one immune checkpoint inhibitor, CI-8993, as antagonist to VISTA signaling pathway for cancer patients. The company plans to initiate a clinical study on the candidate by year-end.

The company also has one marketed drug in its portfolio, Erivedge, which is approved as a treatment for advanced basal cell carcinoma, a type of skin cancer. The company has a collaboration with Roche (RHHBY - Free Report) related to commercialization of the drug.

Chemical Industry Looking Up: 5 Top Growth Stocks to Scoop Up