Valued at $163.7 million, the contract is expected to be completed by Sep 9, 2028. Per the terms, Northrop will supply repairs and sustain spares and engineering services for the APY-1/2 systems. Work related to this deal will be conducted in Linthicum Heights, MD.

Radars have been utilized as a significant military weapon since World War II for locating threats and targets as well as determining the adversary’s position and direction in advance.  Nowadays, radars in defense are used for multiple purposes like ground surveillance, missile control, fire control, air traffic control, moving target indication, weapons location, and vehicle search.

It has been observed that the demand for military radar systems has expanded manifold in recent times, driven by factors like rise in defense spending of emerging economies, increase in regional tensions and inter-country conflicts that have boosted threats from missiles and aircraft.

Northrop is a pioneer in Active Electronically Scanned Array (AESA) radars and has been at the forefront of AESA innovations for more than 60 years. Notably, the company’s AN/APY-1/2 radar is installed in Boeing’s (BA - Free Report) E-3 airborne warning and control system, which carries out airborne surveillance and command, control and communications functions for tactical and air defense forces. The company’s broad portfolio of products also comprises radars like AN/APG-83 scalable agile beam radar, AN/ASQ-236 Dragon’s eye radar pod as well as AN/APG-81 and AN/APG-71 for Lockheed’s (LMT - Free Report) F-35 and F-22 jets respectively,

Considering the growing demand for radar systems worldwide, Northrop frequently wins contracts from Pentagon and other U.S. allies, leveraging on its broad portfolio of combat proven radar systems. The latest contract win is a bright example of that.

Per Markets and Markets Research, the global military radar market is expected to reach $17.4 billion by 2025 at a CAGR of 4.4% from 2020. Such growth projections for the aforementioned market should benefit prominent radar manufacturers like Northrop and Raytheon Technologies (RTX - Free Report) .

Shares of this Zacks Rank #3 (Hold) company have lost 13.7% in the past year compared with the industry’s decline of 24%. You can see the complete list of today’s Zacks #1 Rank (Strong Buy) stocks here. 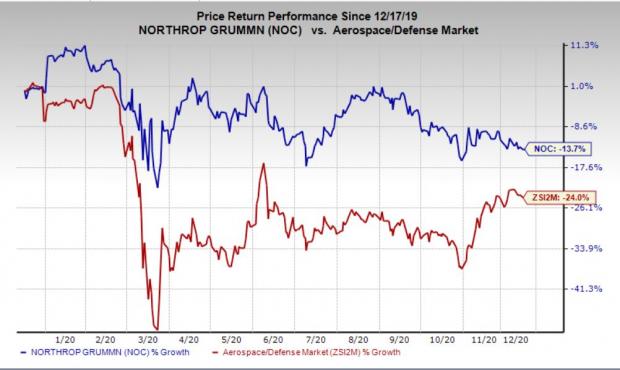