Kansas City Southern (KSU) Shares Up 25% in a Year: Here's Why

Shares of Kansas City Southern (KSU - Free Report) have surged 25.1% in a year’s time, outperforming the industry’s 19.9% rally, despite coronavirus-led disruptions weighing on its volumes. 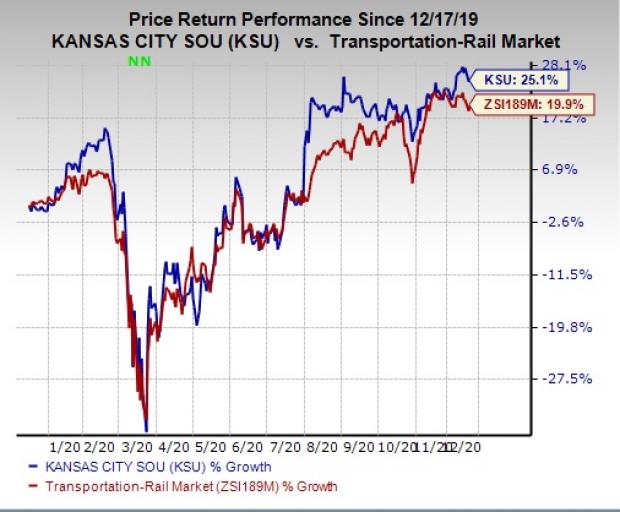 Reasons Behind the Price Surge

While volumes are weak when compared with the year-ago levels, it has increased substantially from the pandemic-driven lows in April and early May. This tailwind has also boosted shares of the company. During the third-quarter conference call, the company stated that at the end of the third quarter of 2020, volumes were approximately 60% higher than the lows in early May. Owing to this improvement in volumes, it estimates 2020 adjusted earnings to slightly increase on a year-over-year basis compared with its previous expectation of the same to be roughly similar to $6.90 reported in 2019. Kansas City Southern expects volumes to keep improving in the fourth quarter and in 2021.

Lastly, we believe shares of the company got a boost from its impressive bottom-line performance even in the current turbulent scenario. The bottom line has been aided by the precision scheduled railroading (“PSR”) model. With increased efficiency and reduced costs from the PSR model, the company’s earnings (on a reported basis) increased 15.6% year over year in the first nine months of 2020, despite substantial decline in revenues. Additionally, adjusted operating ratio (operating expenses as a percentage of revenues) improved to 60.9% in the same period from 63.5% a year ago. Notably, lower the value of the metric, the better. Adjusted operating ratio is predicted to be at the low end of the 60-61% range in 2020. Kansas City Southern expects to generate PSR savings of $95 million in the current year.

Here's Why You Should Add Hologic (HOLX) to Your Portfolio