Teleflex Incorporated (TFX - Free Report) recently completed its previously announced acquisition of Z-Medica, LLC, a renowned manufacturer of hemostatic products. Financial terms (as stated during the time of initiation of the definitive acquisition deal toward the end of October), included making an upfront cash payment of $500 million along with other agreement-related terms.

For investors’ note, the buyout is not expected to significantly impact Teleflex’s balance sheet for 2020. However, benefits are expected to be accrued from 2021.

With the recent buyout, Teleflex aims to strengthen its Vascular Access business across the globe.

Z-Medica’s hemostatic technologies include products which contribute to hemorrhage control with cost-effective and efficient bleeding-control solutions. Z-Medica’s portfolio includes three main brands — QuikClot, Combat Gauze and QuikClot Control+, which utilize a proprietary technology consisting of gauze infused with kaolin. Notably, QuikClot Control+ is the first hemostatic dressing indicated for temporary control of Class III or Class IV bleeding in the internal organ space. With the buyout, these technologies will be integrated into Teleflex’s portfolio, thus enabling it to leverage strength in the hospital, Emergency Medical Services and military call points. These differentiated products are expected to complement the EZ-IO and EZPLAZ product portfolio of Teleflex.

Per a report by Verified Market Research, the global hemostatic agents’ market was valued at $3.78 billion in 2019 and is anticipated to reach $6.22 billion by 2027 at a CAGR of 6.4%. Factors like growing incidents of patients suffering from bleeding disorders, rising number of trauma and surgical cases, and technological advancements are expected to drive the market.

Given the market potential, the buyout is expected to significantly boost Teleflex’s business.

Teleflex has witnessed a few developments across its businesses over the past few months.

The company, during its third-quarter earnings call in October, confirmed that its Vascular Access segment witnessed modestly higher-than-expected demand due to the pandemic. This demand surge contributed to the growth of the segment’s revenues from the Americas during the quarter.

The same month, Teleflex announced the expansion of its UroLift System portfolio with the introduction of the UroLift Advanced Tissue Control System. Further, the company released the Arrow ErgoPack Complete CVC System in the same month.

Teleflex received the FDA’s 510(k) clearance to expand the Indications for Use of its Arrow EZ-IO Intraosseous Vascular Access System in October. With the expanded indication, the device can be used for up to 48 hours when alternate intravenous access is not available or reliably established in patients aged 12 years and above. 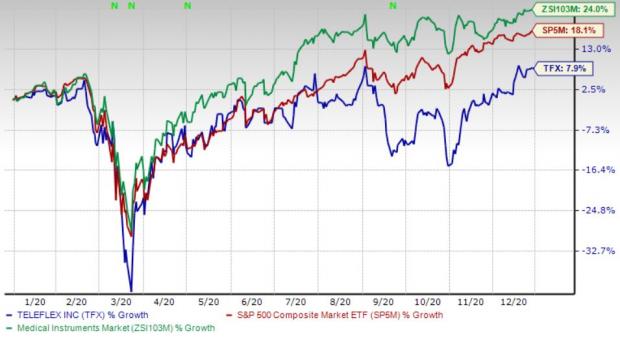 5 Momentum Stocks for Keeping Your Portfolio Warm This Chilly Winter