3 Entertainment Stocks That Could Continue Its Bull Run in 2021

With the novel coronavirus affecting almost all the spheres of the global economy so far, organizations have been reeling under massive losses with wrecked financial markets and mass layoffs. Further, people are religiously adhering to social-distancing norms, work-from-home trends and other directives to contain the spread of the deadly pandemic. As a result, majority of the world’s population, especially millennials, became dependent on in-home entertainment experiences, ranging from streaming services and online gaming to content programming and video chat platforms. Many are also migrating toward social media to connect digitally, stay informed of what’s trending and most importantly, to get out of the rut.

The media and entertainment industry is currently experiencing a huge spike in demand for live content on the back of robust streaming platforms. Innovative business models across the entertainment value chain are an added bonus. While the global catastrophe induced numerous cancellations of live events, virtual experience thrived on live-streamed home productions. In fact, user-generated content platforms like Instagram are also increasingly forging relationships with the top influencers wherein they produce content-driven videos from the comfort of their homes, thereby adding a different dimension to the digital entertainment experience.

Markedly, the pandemic also boosted interactive gaming with the growth of app-based games and esports. Per an IDC report, global spending on Augmented Reality/Virtual Reality (AR/VR) is expected to grow from more than $12 billion in 2020 to $72.8 billion in 2024. Also, as cinema halls have closed down due to COVID restrictions, many high-budget films, which were long scheduled for theater releases, got delayed. This is likely to provide lucrative opportunities for over-the-top (OTT) platform-driven companies as they eye digital releases for an uninterrupted entertainment experience.

It is worth mentioning that American consumers are reported to have spent a whopping $7.3 billion on home entertainment in third-quarter 2020, per a Digital TV Europe article. This data itself underlines the fact that consumers are willing to spend more on new-age immersive content with enhanced experiences, thereby deepening their reliance on streaming platforms in the days to come.

Moreover, major players in the entertainment industry are assisting content providers to spur demand for more on-the-go experiences. Revamping online advertising and delivering streaming services through network-based video transcoding technologies coupled with a bouquet of new entertainment offerings are some of the vital trends that are going to dominate 2021. That said, one cannot deny the downside that media companies, film producers and distributors are facing a tough time to compensate for the lost revenues with the shutdown of movie theaters. Despite such considerable headwinds, content providers are adopting several cost-saving initiatives and operational efficiency programs like direct-to-consumer to improve the commercial impact while generating new revenues with better opportunities.

Backed by such tailwinds, here are three major companies that are enjoying a substantial surge in the sales of their products and services amid the new variants of COVID-19 infection.

Sony Corporation (SNE - Free Report) :  Based in Tokyo, Japan, Sony is a multinational conglomerate that designs, manufactures and sells several consumer and industrial electronic equipment. With its presence in the music and image-based software markets globally, the company is active in production, acquisition and distribution of motion pictures as well as television programming along with the operation of television and digital networks. Markedly, Sony’s Game & Network Services segment is benefiting from buoyancy in game software sales with the launch of next-generation gaming console, PlayStation 5. Further, it expects the Music segment to benefit from healthy streaming revenues, strong performance of the mobile gaming application Fate/Grand Order and the impact from the consolidation of EMI Music Publishing.

With a market cap of $123.4 billion, shares of this currently Zacks Rank #1 (Strong Buy) company have gained 46.3% compared with its industry’s growth of 40.5% over the past year. It has a long-term earnings growth expectation of 7.9%. Sony delivered a trailing four-quarter earnings surprise of 170.3%, on average. You can see the complete list of today’s Zacks #1 Rank stocks here. 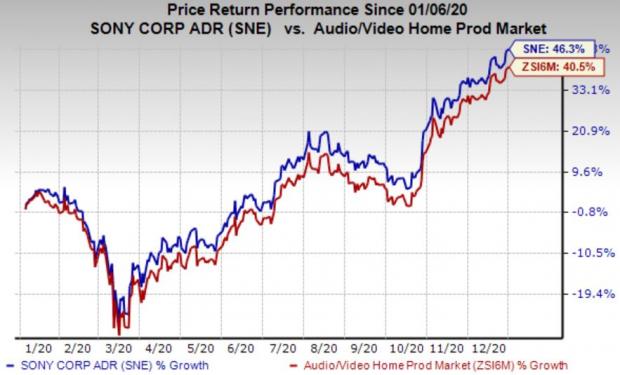 Netflix, Inc. (NFLX - Free Report) : Headquartered in Los Gatos, CA, Netflix is a well-renowned OTT content platform and production company that streams movies, television shows and documentaries across a wide variety of genres and languages. As a forerunner in the streaming space, the company is spending aggressively on building its original show portfolio. This is helping it sustain its leading position despite the introduction of services like Disney+ and Apple TV+ as well as the existing services like Amazon prime video. The company’s focus on streaming regional content is aiding international growth. Netflix is diversifying its content portfolio and also working on projects across India, Mexico, Spain, Italy, Germany, Brazil, France, Turkey and the entire Middle East. Markedly, higher number of originals is expected to bolster its subscriber growth in 2021.

With a market cap of $238.9 billion, shares of this presently Zacks Rank #3 (Hold) company have soared 61% compared with its industry’s rally of 30.6% over the past year. It has a long-term earnings growth expectation of 30%. Netflix delivered a trailing four-quarter earnings surprise of 28.9%, on average. 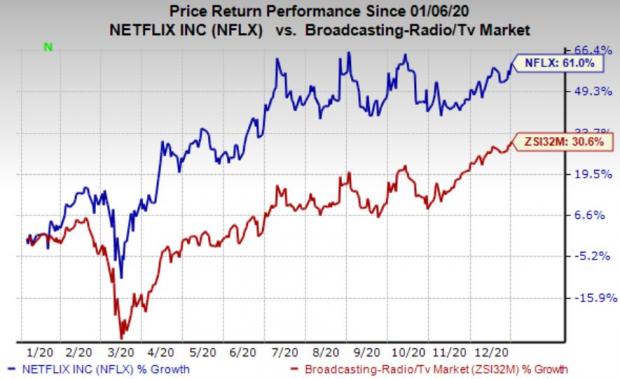 Take-Two Interactive Software, Inc. (TTWO - Free Report) : This New York, NY-based company is a leading developer and publisher of video games. The company sells games, both physically and digitally through direct relationships with large retail customers and third-party distributors. GameStop, Microsoft, Sony, Steam and Wal-Mart are its top customers. Markedly, Take Two is benefiting from portfolio strength and a solid increase in recurrent consumer spending. The company’s growth is primarily driven by its popular franchises, namely Grand Theft Auto (GTA) and Red Dead Redemption. Lately, Take Two has been cautious in its approach to the e-sports market, which refers to live video game tournaments. Also, the growing traction in the company’s NBA franchise bodes well.

With a market cap of $23.9 billion, shares of this currently Zacks #3 Ranked company have jumped 66.6% compared with its industry’s growth of 38.8% over the past year. It has a long-term earnings growth expectation of 12%. Take Two delivered a trailing four-quarter earnings surprise of 49%, on average. 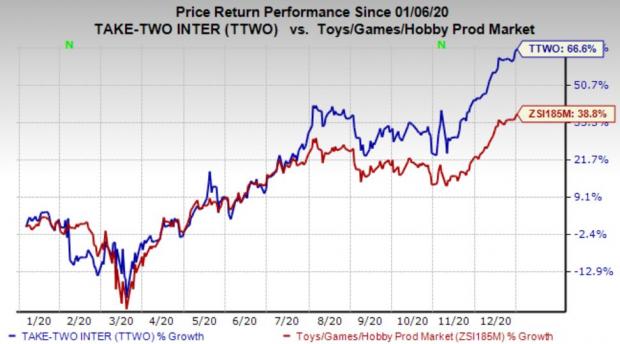