In fact, the delivery count for fourth-quarter 2020 hit a new record, smashing the company’s previous best in the third quarter, which witnessed deliveries of 139,300 units.

Nonetheless, the delivery performance marks a remarkable year for Tesla, reflecting a 35.7% jump year on year. Defying the coronavirus crisis, Tesla was able to boost vehicle production and deliveries throughout the full year by ramping up the Model Y production and inking agreements with new battery cell suppliers in order to produce more of the high voltage battery packs that steer its electric cars.

Additionally, the Model Y production at Telsa’s Gigafactory in Shanghai has commenced, with deliveries of Made in China Model Y likely to kick-off shortly.

Currently, China is the world’s biggest EV market and the country has been head strong in its transition toward a green future.  Importantly, the country aims electric cars to account for 20% of the new car sales by 2025 and kick start an era of green transportation. Amid this transforming scenario, automakers in China are fast changing gears to electric. Despite the pandemic rattling the auto sector, China's EV space has been witnessing a boom as one after another carmakers have reported new highs in monthly and quarterly deliveries.

Reportedly, Tesla’s share of China’s EV market was 21% during the first six months of 2020 compared with the prior year’s 6%. Tesla regained its Chinese market share once it started selling domestically-produced vehicles in China in late 2019 as those were 13% cheaper for Chinese consumers than the vehicles imported from the United States.

China is Tesla’s second biggest market, the first being the Unites States. To capitalize on the surging demand for EVs in China as well as to take advantage of the hefty EV subsidies offered in the nation, the EV maker is planning to further expand sales in the region.

In fact, Tesla has priced Model Y at 339,900 yuan ($52,000), lower than the starting price of vehicles offered by its rivals like Nio Inc (NIO - Free Report) , XPeng (XPEV - Free Report) and Li Auto (LI - Free Report) . For instance, Nio markets its EC6 model at a starting price of 368,000 yuan. Tesla’s pricing strategy is aimed at providing the automaker a competitive edge over its peers in China, thus boosting the sales in the country.

Tesla has revolutionized the EV space much the same way as Amazon has changed the retail landscape and Netflix transformed entertainment. The auto giant, which secured a prestigious spot in the S&P 500 Index on Dec 21, 2020, after posting five consecutive quarters of profit, set the stage for 2021 with its record delivery count in the fourth quarter. In fact, the EV pioneer is poised for global expansion and is building two new vehicle assembly facilities — one outside Berlin that could eventually assemble as many as 500,000 cars annually, and one in Texas that will manufacture the company’s first pick-up. Both are anticipated to become operational later this year, along with its existing vehicle assembly facilities in Fremont and Shanghai.

Tesla’s expanding deliveries in the mainland with Model Y sales set to commence soon and its two new assembly facilities have given the automaker a head start into 2021. Tesla is, in fact, well set to achieve the milestone of producing 1 million vehicles globally per year by 2022.

Notably, shares of the company have soared 681.4% in the past year compared with its industry’s rally of 258%. 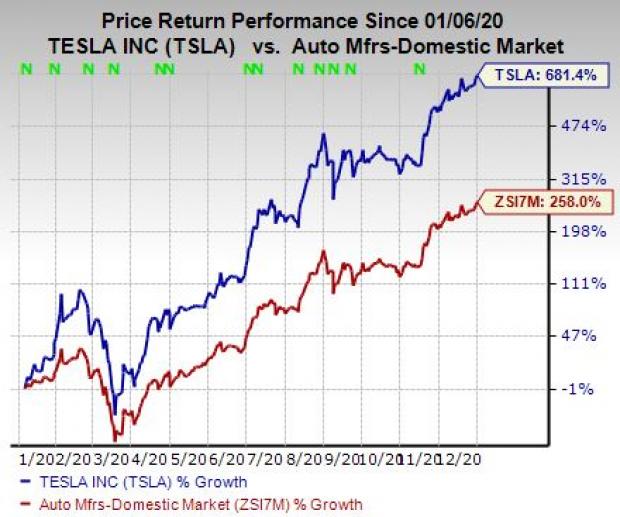