The company has consolidated the two onshore natural gas treatment units — now part of the Onshore Treating Facility (“OTF”) — that it acquired from Exxon Mobil Corporation (XOM - Free Report) in 2019. W&T Offshore’s Mobile Bay area natural gas production will be treated in the OTF during the end of this month. Importantly, the move is expected to save the company $5 million per annum starting this year.

It was the highest bidder in two shallow water blocks in the Gulf of Mexico (GoM) lease sale 256. The Eugene Island South Addition block 389 and Ewing Banks block 979 are spread across 8,800 acres and cost the company a total of $500,000. W&T Offshore was awarded full working interest in the two leases. The blocks have a lease term of five years.

The company’s bank group completed the semi-annual borrowing base redetermination, which was set at $190 million. At the end of fourth-quarter 2020, it had $80 million in borrowings under the revolving credit facility. The next redetermination process is scheduled for spring 2021. Moreover, it has added WTI Crude oil collars on 200 barrels of oil per day of production starting from February till the end of the year. The deal has a price floor of $40 per barrel and $54.90 per barrel ceiling.

W&T Offshore is growing its presence in the GoM fields, wherein production and proved reserves have surged over the past eight years. The company earlier announced that it has brought back significant amount of production online well before time that was paused due to storms in the GoM region. Moreover, output from its Magnolia field has been restored.

As a result, the company’s fourth-quarter production volumes are expected to increase from the prior projected range of 34,700-36,900 barrels of oil equivalent per day. Of the total volumes, 34% is expected to be oil, while 11% and 55% are likely to be natural gas liquids and natural gas, respectively. A sequential rise in production will likely help it generate higher profits in the December quarter.

W&T Offshore’s shares have gained 42.7% in the past three months. 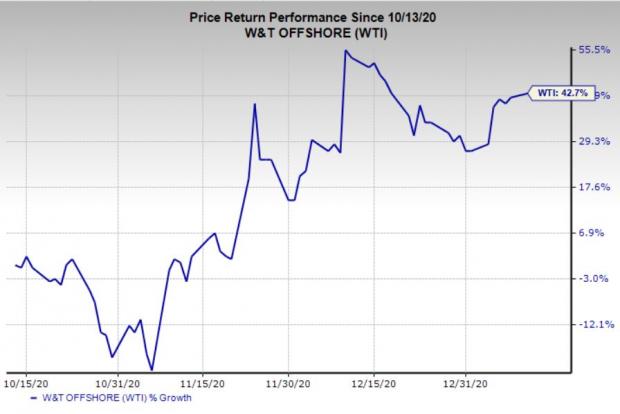