Eli Lilly (LLY - Free Report) announced promising data from a phase II study — TRAILBLAZER-ALZ — evaluating its antibody candidate, donanemab, in patients with early symptomatic Alzheimer's disease (“AD”). Data showed that treatment with the candidate slowed disease progression compared to placebo. Donanemab significantly slowed down decline in a composite measure of cognition and daily function in patients over a treatment period of 76 weeks. Detailed data from the study will be presented at a future medical congress and submitted for publication in a peer-reviewed clinical journal.

Lilly’s shares climbed 11.7% on Jan 11, following encouraging data readout from the AD study as currently no treatments that slow cognitive decline in Alzheimer’s disease patients have been approved by the FDA. The company’s shares have gained 33.4% in the past year compared with the industry’s increase of 4%. 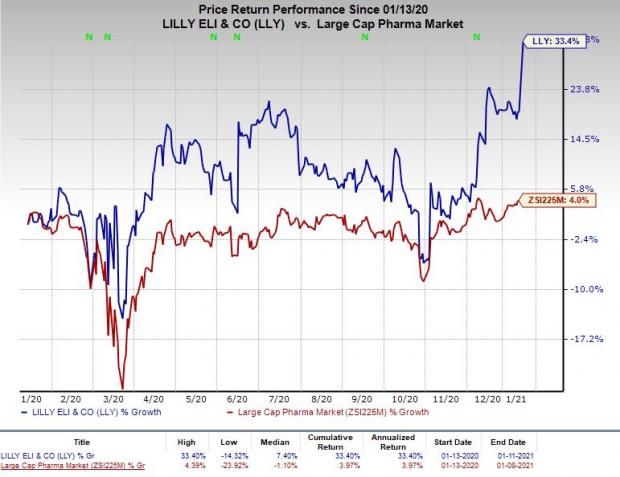 The study met its primary endpoint of change in the Integrated Alzheimer's Disease Rating Scale (iADRS) from baseline. Treatment with donanemab slowed decline in the iADRS score by 32% relative to placebo. Please note that iADRS is a clinical composite tool, which combines the cognitive measure ADAS-Cog13 and functional measure ADCS-iADL, two commonly used measures in Alzheimer's disease. The study also achieved consistent improvements in all prespecified secondary endpoints measuring cognition and function. However, nominal statistical significance was not reached for every secondary endpoint.

Donanemab targets a modified form of beta amyloid called N3pG and treatment with the candidate led to high levels of amyloid plaque clearance rapidly. The candidate achieved a negative amyloid scan or reduction in amyloid plaques to levels seen in scans of healthy individuals in some AD patients. Amyloid plaques are believed to be one of the factors that lead to cognitive decline in AD patients.

The company plans to discuss the TRAILBLAZER-ALZ study data with global regulators and assess the next step of development for donanemab. It is also evaluating the candidate in another ongoing pivotal study — TRAILBLAZER-ALZ 2.

Lilly is one of the old players in the field of AD drug development. The company is also developing solanezumab for preclinical AD patients in a late-stage study. However, the candidate failed to meet the primary endpoint of a phase III study in March 2020, evaluating it in patients with dominantly inherited AD.

The AD market has attracted a lot of attention from several biggies in the pharma/biotech space, given its market potential. One of the leading contenders in the AD segment is Biogen’s (BIIB - Free Report) controversial investigational treatment for Alzheimer’s disease — aducanumab. The company has completed several late-studies on the candidate. However, an FDA advisory committee voted against approving aducanumab last year in November. An FDA decision is expected in March 2021. Biogen has another AD candidate, BAN2401, which is being evaluated in a phase III study for preclinical (asymptomatic) AD. Swiss pharma giant Roche (RHHBY - Free Report) has two late-stage pipeline candidates, namely crenezumab and gantenerumab. Both are currently being evaluated for Alzheimer’s.

However, AD is one of the toughest diseases to be treated. While there is no cure for the disease yet, there are a few drugs approved by the FDA that can help control the symptoms of AD. Successful development of therapies for treating Alzheimer’s disease is challenging due to the risk of adverse events. Several other companies have terminated their AD programs following years of failure including Merck and Pfizer (PFE - Free Report) .

In a separate press release, Lilly announced that the FDA has accepted its supplemental New Drug Application seeking label expansion for its type II diabetes drug, Jardiance. The sBLA is seeking approval of the drug as a treatment to reduce the risk of cardiovascular death and hospitalization for heart failure as well as to slow kidney function decline in adults with chronic heart failure with reduced ejection fraction. The label expansion will include patients with and without type II diabetes. The sBLA was based on data from the phase III EMPEROR-Reduced study, which showed that Jardiance is associated with a significant 25% relative risk reduction in time to cardiovascular death or hospitalization due to heart failure.