Here's Why Sony (SNE) is an Enticing Investment Bet Now

Shares of Sony Corporation have moved up 40.8% over the past year driven by healthy revenues on the back of a flexible business model and solid market response for PlayStation 5 (PS5) gaming console. Earnings estimates for the current and next fiscal year have increased 113.6% and 6.3%, respectively, since June 2020, implying robust growth potential. With healthy fundamentals, this Zacks Rank #1 (Strong Buy) consumer and electronic equipment manufacturer appears to be a solid investment option at the moment. You can see the complete list of today’s Zacks #1 Rank stocks here. 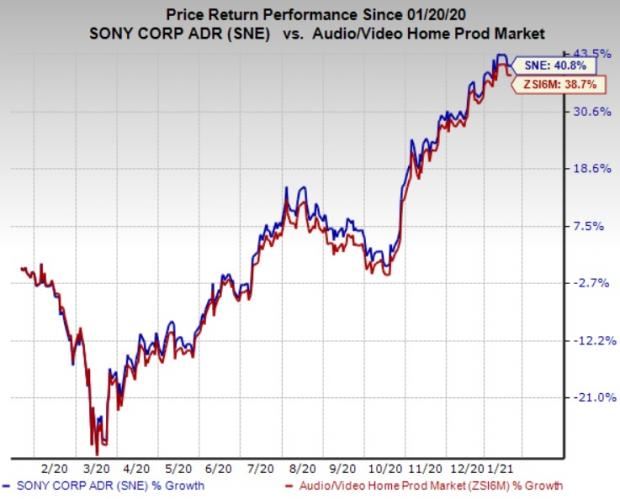 Sony launched PS5 on Nov 12 to capitalize on the uptick in pandemic-induced nesting activities — games, streaming video and home fitness. The gaming console was an instant hit with customers and was immediately sold out worldwide. Sony has loaded the product with updated graphics, a newly-redesigned controller and a collection of exclusive games. With a powerful 8-core AMD Zen 2 processor, 10.3 teraflops of graphics power, gorgeous 4K visuals and an immersive end-user experience, the PS5 promises one of the best performances witnessed in a gaming console. Moreover, PS5 loads games about 10 to 20 seconds faster than the PS4 Pro and can even read physical discs a few minutes faster, making it an ideal choice for tech-savvy impatient gamers.

In order to fuel its growth momentum, Sony is mostly concentrating on the premium segment of the branded products market. Leveraging on its object-based spatial audio technology, the company has introduced 360 Reality Audio for a surround sound immersive experience. It is working with major music labels, music distribution services to provide technology for building a musical ecosystem around 360 Reality Audio. Sony is also working to promote this music experience to music creators, artists and music fans, with an aim to build an entirely new world of music entertainment. Furthermore, the company announced that it is going to shift its consumer electronics business’ European headquarters from the United Kingdom to the Netherlands, to ensure continuity of operations amid Brexit-related disruptions. It had set up a new company in the Netherlands, which would be combined with U.K.-based Sony Europe.

Sony has also decided to foray in the consumer drone market with the launch of a new project. The company recently launched the product under the ‘Airpeak’ brand, reflecting its focus on 3R technologies (Reality, Real-time and Remote) in the drone area. Based on AI (artificial intelligence), the drone is likely to improve the efficiency of various industries with the highest levels of safety and reliability standards. The AI capabilities are likely to help the drone better navigate between buildings and avoid aerial obstacles without any human intervention for improved performance metrics.

Moreover, Sony has undertaken a series of concerted efforts to attain a leaner organizational structure. The company announced several changes to the Sony Group’s organizational structure to boost individual businesses and leverage the diversity of its business portfolio. Effective Apr 1, 2021, the current Sony Corporation will change its name to Sony Group Corporation. Sony Electronics Corporation, which currently operates the electronics business that is the origin of Sony’s business, will acquire the name Sony Corporation. Of the Sony Group’s core businesses, Game & Network Services, Music, Pictures and Financial Services have established executive structures. The electronics businesses, including Imaging & Sensing Solutions, will establish optimal executive structures for each business.

With a VGM Score of B, the stock has long-term earnings growth expectation of 9.5%. The stock delivered a positive earnings surprise of 170.3%, on average, in the trailing four quarters. Sony is housed within the Audio Video Production industry, which carries a Zacks Industry Rank #43, which places it among the top 17% of more than 250 Zacks industries. The stock’s Zacks Industry Rank, which is basically the average of the Zacks Rank of all the member stocks, indicates encouraging prospects. Our research shows that the top 50% of the Zacks-ranked industries outperforms the bottom 50% by a factor of more than 2 to 1. Consequently, the stock appears to be an enticing investment option in the volatile market.

Comtech delivered a positive earnings surprise of 2%, on average, in the trailing four quarters.

Qualcomm has a long-term earnings growth expectation of 19.6%. It delivered a positive earnings surprise of 17.3% in the trailing four quarters, on average, beating estimates thrice.

Sonim delivered a positive earnings surprise of 2.2%, on average, in the trailing four quarters.