Barring one-time items, adjusted earnings were $1.59 per share in the reported quarter, up from $1.31 logged in the year-ago quarter. The figure also topped the Zacks Consensus Estimate of $1.57.

Net sales rose roughly 2% year over year to $3,757 million. The figure surpassed the Zacks Consensus Estimate of $3,561.6 million. Sales volumes were down around 1.5% year over year, reflecting the impacts of the coronavirus pandemic in certain markets. Selling prices rose 1.5%.

The company benefited from higher year-over-year sales in its Industrial Coatings segment in the quarter, led by the automotive original equipment manufacturer, general industrial and packaging coatings businesses. It also witnessed strength in its global architectural coatings business.

Performance Coatings: Net sales in the segment was around $2.2 billion in the fourth quarter, down around 1% year over year. Sales volume in the segment declined around 6% mainly due to lower demand resulting from the pandemic. Selling prices rose around 3%.

Industrial Coatings: Sales in the segment totaled around $1.6 billion, up around 7% from the prior-year quarter’s figure. Sales volumes rose 5% year over year due to improved demand for automotive and general industrial coatings. Selling prices were flat year over year.

Net income in the segment totaled $282 million, up around 40% year over year. Results were driven by restructuring cost savings, higher sales volumes and favorable currency impact.

The company generated record operating cash flow of about $2.1 billion for the full year. PPG Industries also paid around $500 million in dividends in 2020. It also had roughly $1.5 billion remaining on its current share repurchase authorization at the end of the year.

The company expects to gain from volume recovery in its technology-advantaged automotive refinish and aerospace coatings businesses, synergy realization and earnings accretion through integration of recently announced acquisitions and an eventual inventory restocking in specific industrial end markets.

Factoring in current global economic activities and the near-term economic uncertainty associated with the pandemic, PPG Industries expects total sales volume for the first quarter of 2021 to be flat to modestly higher, differing by business and region.

The company also sees adjusted earnings for the first quarter to be $1.55-$1.61 per share. The mid-point of this range indicates an increase of more than 20% over the comparable year-ago figure of $1.31.

Shares of the company have gained 9.8% in the past year compared with 24% rise of the industry. 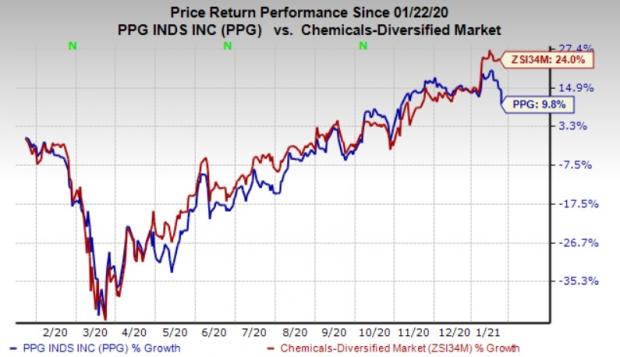 Fortescue has a projected earnings growth rate of 75.5% for the current fiscal. The company’s shares have surged around 121% in a year. It currently sports a Zacks Rank #1 (Strong Buy). You can see the complete list of today’s Zacks #1 Rank stocks here.

Impala Platinum has an expected earnings growth rate of 189.4% for the current fiscal. The company’s shares have rallied around 43% in the past year. It currently carries a Zacks Rank #1.

BHP Group has a projected earnings growth rate of 61.2% for the current fiscal year. The company’s shares have gained around 28% in a year. It currently carries a Zacks Rank #1.