Revenues of $759 million surpassed the Zacks Consensus Estimate of $720 million. Further, the figure increased 16% year over year but declined 7.4% from the previous quarter.

Coming to the price performance, Teradyne has returned 85.8% over a year, outperforming the industry’s rally of 22.8%. 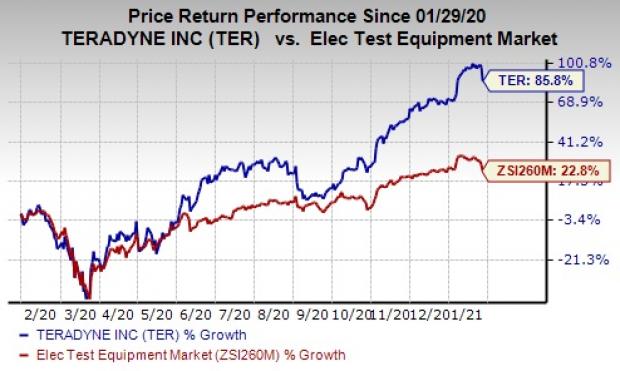 Year-over-year growth in total revenues was driven by stronger-than-expected industrial automation shipments during the reported quarter. This led to 4% growth in Industrial Automation revenues on a year-over-year basis.

Consequently, operating margin was at 29.7%, up 230 bps from the year-ago quarter.

Net cash provided by operating activities was $260.4 million for the fourth quarter versus $342.5 million in the prior quarter.

During the quarter, the company paid out $16.6 million as dividends.

Management expects revenues of $720-$780 million for first-quarter 2021. The Zacks Consensus Estimate for the same is pegged at $739.4 million.

Amazon (AMZN) to Report Q4 Earnings: What's in the Cards?