Total revenues were $70 million compared with $27 million in the year-ago quarter. The significant increase was mainly due to higher Captisol revenues. The top line comfortably beat the Zacks Consensus Estimate of $54.27 million.

Ligand’s shares have gained 96.7% in the past year compared with the industry’s 15.5% increase. 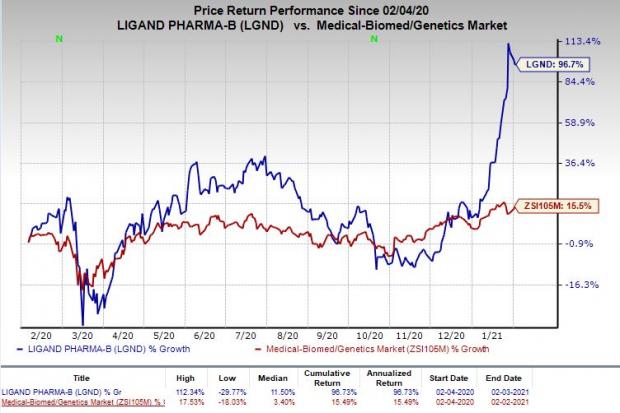 Royalty revenues remained flat year over year at $11 million in the fourth quarter. Ligand primarily earns royalties on sales of Amgen's (AMGN - Free Report) Kyprolis and Acrotech Biopharma’s Evomela, which were developed using its Captisol technology. Royalties remained flat as sales of the partnered drugs were hurt due to COVID-19.

Captisol sales were $41 million compared with $7.1 million in the year-ago quarter. The significant increase was due to higher sales of Captisol to support availability of Gilead’s (GILD - Free Report) Veklury (remdesivir), which is approved for treating severe COVID-19 patients in the United States.

Contract revenues were $18 million in the fourth quarter compared with $8.8 million a year ago.

Meanwhile, Ligand plans to start a pivotal study on its wholly-owned pipeline candidate, Captisol-enabled Iohexol, by the end of the first quarter. It is being developed as a contrast agent for hospital-based imaging procedures.

Gartner (IT) to Report Q4 Earnings: What's in the Cards?