Meanwhile, two S&P 500 auto firms Ford and Cummins (CMI - Free Report) reported quarterly results last week. Ford’s fourth-quarter 2020 results were quite a smasher. Not only did the U.S. auto giant post impressive earnings and revenues that beat estimates, it also announced massive investment plans in the electric and driverless market, which are set to boost its prospects and market position, going forward. Cummins also posted stellar fourth-quarter earnings and revenues that beat estimates as well as surged year over year.

1. Harley-Davidson (HOG - Free Report) reported fourth-quarter adjusted loss of 63 cents per share against the Zacks Consensus Estimate of a profit of 10 cents. The bottom line also compared unfavorably with the year-ago earnings of 9 cents a share. The iconic motorcycle manufacturer generated consolidated revenues (including motorcycle sales and financial services revenues) of $725 million, down 32% from the year-earlier quarter’s $1,072 million. Revenues from the Motorcycle & Related Products unit came in at $531 million, missing the consensus mark of $789 million.

The company laid out the details of the five-year ‘Hardwire’ turnaround strategy. Hardwire’s financial goals from 2021 to 2025 include mid single-digit annual growth in revenues, and a steady improvement in the operating margin from motorcycle sales as well as double-digit growth in the Financial Services segment. The firm also targets low double-digit growth in earnings per share through 2025.

2. Cummins reported fourth-quarter 2020 earnings of $3.36 per share, surpassing the Zacks Consensus Estimate of $2.74 and rising from fourth-quarter 2019 earnings of $2.56 a share. Revenues increased 5% year over year to $5,830 million. The reported figure also beat the Zacks Consensus Estimate of $5,182 million. Cummins projects full-year 2021 revenues to increase 8-12% and EBITDA in the range of 15-15.5% of sales. The company expects revenues to increase in all regions and major markets except China. In fact, it anticipates returning 75% of operating cash flow to shareholders in the form of dividends and share repurchases in 2021.

3. Ford posted fourth-quarter 2020 adjusted earnings of 34 cents per share against the Zacks Consensus estimate of a loss of 7 cents. This marked the third straight earnings beat for the firm. Cost cut and restructuring efforts, primarily in the Europe market, led to the outperformance. Ford’s consolidated fourth-quarter revenues came in at $36 billion, down 9% year over year. Importantly, this Zacks Rank #1 (Strong Buy) company generated automotive revenues of $33.2 billion, which outpaced the Zacks Consensus Estimate of $32.9 billion. You can see the complete list of today’s Zacks #1 Rank stocks here.

It should be noted that Ford has committed to spend $29 billion through 2025, which includes $22 billion in electric vehicles and $7 billion in autonomous vehicles. The company anticipates adjusted EBIT for 2021 between $8 billion and $9 billion, not taking into account the acute shortage of semiconductor supply. Importantly, semiconductor shortages are likely to adversely impact the firm’s 2021 adjusted EBIT forecast to the tune of $1-2.5 billion.

In a separate release, Ford announced plans to expand manufacturing operations in South Africa, for which it would spend $1.05 billion (R15.8 billion) over the coming years in the nation. Meanwhile, the auto giant also entered into a six-year partnership with Google, per which the latter will reinvent the connected vehicle experience aimed at accelerating Ford’s restructuring plan.

4. Lithia Motors (LAD - Free Report) reported fourth-quarter 2020 adjusted earnings of $5.46 per share, which beat the Zacks Consensus Estimate of $5.05. The bottom line also increased a whopping 85% from the prior-year quarter’s $2.95 per share. Total revenues rose 20.6% year over year to $3,941.8 million. Moreover, the top line surpassed the Zacks Consensus Estimate of $3,921 million. In fact, for the reported quarter, Lithia Motors claims to have reported the highest quarterly revenues in the company's history.Quarterly dividend of 31 cents a share will be payable on Mar 26 to shareholders of record as of Mar 12, 2021. Lithia Motors had cash and cash equivalents of $160.2 million as of Dec 31, 2020. Long-term debt was $2,064.7 million, marking an increase from $1,430 million as of Dec 31, 2019. 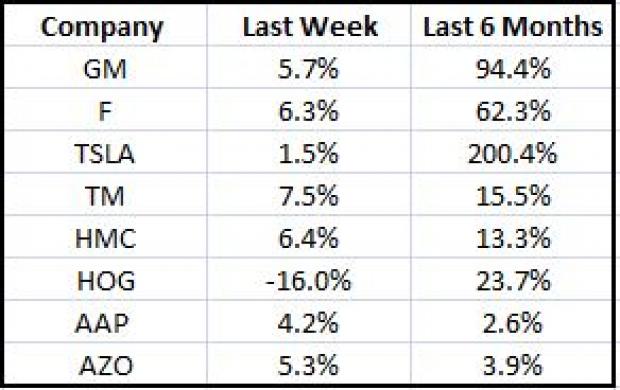 Investors await the quarterly releases of auto biggies like General Motors, Honda, Toyota and others that are scheduled to report quarterly results during the week.