Currently in development, the offshore wind farm referred to as the Hollandse Kust Noord (“HKN”) is located along the coast of the Netherlands and is operated by the Crosswind Consortium. Notably, the consortium is a joint venture between Shell and renewable firm Eneco, owned by Japan-based Mitsubishi Corporation.

Per the terms of the deal, Shell will provide electricity from the wind farm, located 18.5 kilometers off the coast of Dutch, with a total production capacity of 759 megawatts (MW). Amazon is purchasing more than 50% of the overall capacity to power its European facilities and accomplish its aim of becoming net-zero emission company by 2040. The HKN offshore wind farm is expected to come online in 2023.

Amazon will initially extract 380 MW of renewable power, of which 250 MW will be drawn off from Shell and 130 MW from Eneco. Notably, the renewable power extraction is expected to commence in 2024 as the retail giant expects to attain its clean energy target five years early. Moreover, providing renewable power to Amazon enables Shell to fulfill its aim of becoming a net-zero emissions business by 2050 or sooner.

On its part, the agreement, which is known to be Amazon’s largest single-site renewable energy project at present, facilitates its plans to get to net-zero emissions by 2040. Importantly, it also upholds Shell’s ambition to reduce the carbon intensity of its business for a low-carbon future.

Shell is one of the primary oil majors — a group of U.S. and Europe-based energy giants with global operations. The company is fully integrated, as it participates in every aspect related to energy from oil production to refining and marketing.

Shares of the company have outperformed the industry in the past three months. Its stock has gained 25.2% compared with the industry’s 22.8% growth. 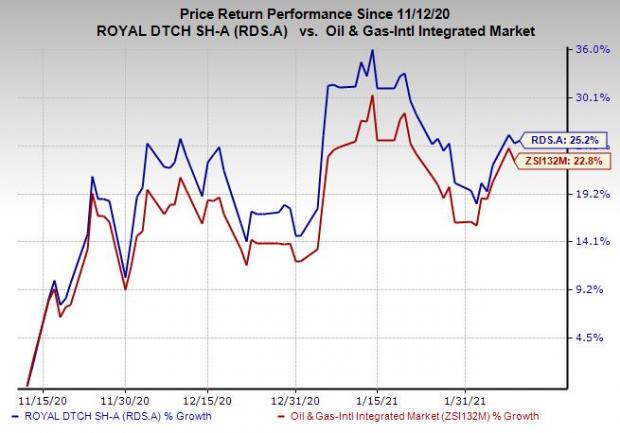 Geopark’s earnings for 2021 are expected to increase 206% year over year.

In addition to the stocks you read about above, would you like to see Zacks’ top picks to capitalize on the Internet of Things (IoT)? It is one of the fastest-growing technologies in history, with an estimated 77 billion devices to be connected by 2025. That works out to 127 new devices per second. Zacks has released a special report to help you capitalize on the Internet of Things’s exponential growth. It reveals 4 under-the-radar stocks that could be some of the most profitable holdings in your portfolio in 2021 and beyond.