Total sales fell around 9% year over year to $14,184 million in the quarter. The figure missed the Zacks Consensus Estimate of $15,717.5 million. Sales were hurt by lower steel shipments due to the impacts of the coronavirus pandemic on steel demand, partly offset by higher average steel selling prices.

Total steel shipments fell around 12% year over year to 17.3 million metric tons in the reported quarter. Average steel selling prices were up around 6% year over year. The steel giant benefited from improved market conditions in the fourth quarter.

At the end of 2020, ArcelorMittal had cash and cash equivalents of around $6 billion, up around 19% year over year. The company’s long-term debt was $9.8 billion, down roughly 14% on a sequential-comparison basis.

Moving ahead, ArcelorMittal envisions global apparent steel consumption (“ASC”) to grow 4.5-5.5% in 2021. This compares with a contraction of 1% in 2020. The global steel industry is now benefiting from a favorable supply-demand balance that is supporting rising utilization as demand recovers, the company noted. ArcelorMittal sees ASC to grow year over year in 2021 in all of its core markets based on this positive outlook.

The company also revealed a new $1 billion fixed cost reduction program which it expects to complete by the end of next year. The program includes actions to improve productivity and maintenance efficiency, and rationalize support functions. The company noted that the plan includes a 20% reduction in corporate office headcount. ArcelorMittal expects to achieve the majority of the savings in 2021.

ArcelorMittal’s shares have gained 26.7% in the past year compared with 27.3% rise of the industry. 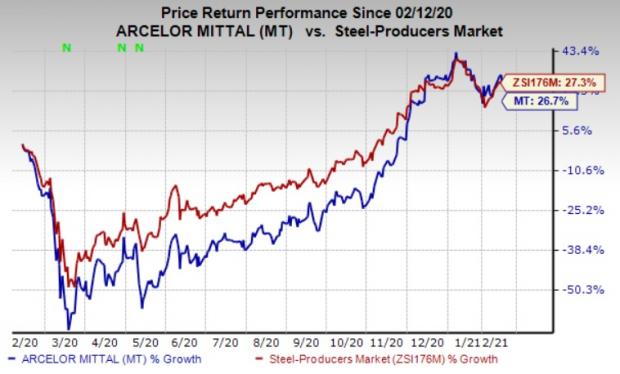 Fortescue has a projected earnings growth rate of 78.4% for the current fiscal. The company’s shares have surged around 147% in a year. It currently sports a Zacks Rank #1. You can see the complete list of today’s Zacks #1 Rank stocks here.

Impala Platinum has an expected earnings growth rate of 189.4% for the current fiscal. The company’s shares have rallied around 57% in the past year. It currently carries a Zacks Rank #1.

New Gold has a projected earnings growth rate of 733.3% for the current year. The company’s shares have shot up around 107% in a year. It currently carries a Zacks Rank #2 (Buy).