Exxon Mobil Corporation (XOM - Free Report) has fully recommenced operations at the oil refinery in Beaumont, TX, and is carrying out production at a planned output rate, per Bloomberg.

As the North American winter storm created turmoil in energy markets, various commodity sectors — including the oil refining industry — were forced to shut down oil and gas operations.

Refineries and pipeline operators throughout the Gulf Coast had to limit or even cease activities in Texas due to immensely cold temperatures. The extreme conditions led the company to slash fuel production from one of the largest energy centres globally. As a result, ExxonMobil sealed the Beaumont refinery near Houston, which it plans to expand by 2023.

Per Reuters, ExxonMobil restarted the 560K barrels-per-day hydrocracker at the Baytown refinery on the Texas Gulf coast. In addition, it resumed work on the Pipestill 7 crude distillation unit, which was the first to be restarted since the Baytown refinery closure. Importantly, fellow operator like TOTAL SE (TOT - Free Report) is also preparing to restart work on the Port Arthur refinery in Houston, which had to be shut down owing to the major storm.

The company’s shares have outperformed the industry in the past three months. Its stock has gained 43.6% compared with the industry’s 19.4% rally. 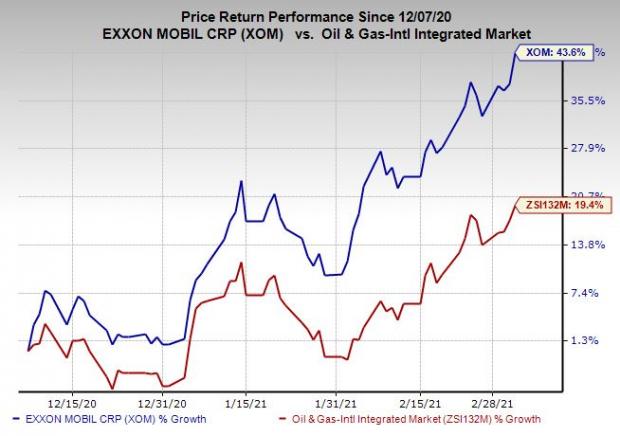 Ovintiv’s earnings for 2021 are expected to increase 8.1% year over year.

5 Stocks to Look Out for Following Recent Upgrades by Brokers