Facebook (FB - Free Report) is in the process of introducing a self-publishing platform for independent writers and journalists, which would support them in terms of content creation and audience growth, per a Reuters report. It will be integrated with Facebook's Pages to enable publishing across multimedia formats including photos, live videos and stories style updates.

The idea is that writers can earn through subscriptions to their work and potentially create additional revenue streams while relying on Facebook to engage their community.

Facebook will allow them to create Groups for their work as well, and also provide metrics on their newsletters. To pilot the program, Facebook plans to pay to help get the tools to build actual websites, in addition to newsletters, off the ground. Moreover, the company will look to add monetization tools later.

This is expected to boost user engagement and performance of Facebook’s shares, which have returned 2.2% in the year-to-date period compared with the Zacks Internet - Services’ and the S&P 500’s rally of 14.2% and 6%, respectively. 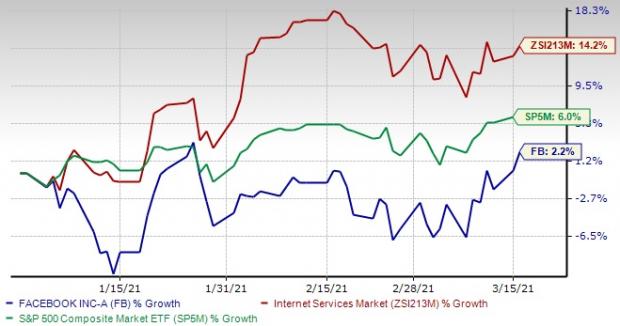 Markedly, since 2018, Facebook has invested $600 million to support journalism and plans to further invest $1 billion in news over the next three years.

Facebook has recently announced the next stage for Facebook News, with its dedicated News tab to launch in Germany this May. The dedicated tab provides a means for Facebook to showcase a curated set of news reports, which will ideally reduce the distribution of misinformation on the platform.

The company had rolled out News tab for users in the U.K. in January, expanding internationally after witnessing positive results with the initial roll-out of the tab in the United States in 2019.

As of 2020, Pew Research Center reported that 55% American adults go to social media for news. More specifically, over 71% of adults were active on Facebook, and about 52% sourced at least some news from the social platform.

News content on Facebook came into sharp focus last month when the company cut off local publishers in Australia due to disagreement over the Australian Government's proposed Media Bargaining Code, which would have forced the company to share revenues with publishers for use of their content.

At the same time, Facebook has sought to establish financial agreements with publishers such as News Corporation (NWSA - Free Report) in Australia in a bid to avoid further regulatory action, while also enabling the company to explore alternative ways to showcase news content in a more collaborative and engaging way.

That connectivity can also increase reliance on its platform and tools among traditional media players, further solidifying this Zacks Rank #2 (Buy) company's place as a key source of news and information. You can see the complete list of today’s Zacks #1 Rank (Strong Buy) stocks here.

The rapid introduction and expansion of news services from tech giants like Facebook, Twitter (TWTR - Free Report) , Alphabet’s (GOOGL - Free Report) Google and Apple has intensified competition in the digital as well as traditional news market.

Seeing the success that writers are having on the platform, Twitter acquired newsletter platform Revue in January, in an attempt to keep them in the Twitter ecosystem. It also recently developed a Super Follows feature to enable creators and publishers to monetize premium content.

Last year, Google pledged to pay $1 billion over three years to partners for content in the Google News Showcase. The search giant has reached a three-year pay deal with News Corp. in Australia. The latter already has a deal with Apple to provide access to journalism and related content for a potential audience of millions globally.

However, last year, Apple News lost a major publisher, the New York Times, which claimed that Apple’s partnership did not give it enough of a direct relationship with subscribers to justify continuing relationship.

Nonetheless, giving news a separate feed is expected to bolster Facebook’s reputation as a responsible platform in an era of unreliable sources besides its regulatory concerns.

Moreover, Facebook’s News Tab is set to arrive soon in France, India and Brazil although no launch dates have been specified.