Meanwhile, global chip crunch is wreaking havoc on the auto industry and showing no signs of abatement anytime soon. Fire breakout at a Renesas Electronics chip plant has only exacerbated the chip famine. Being one of the largest chipmakers for the auto industry, Renesas believes that the mishap would have a massive impact on chip supplies as operations at the affected plant are expected to remain shuttered for at least a month. Most of the automakers are trying to assess the fallout from this recent speed bump. It should be noted that the auto industry is estimated to lose $61 billion of 2021 sales due to chip shortages.

Amid the global chip crisis, NIO Inc. (NIO - Free Report) temporarily shuttered operations in the JAC-NIO manufacturing plant in Hefei for five days beginning Mar 29. The shortage of semiconductor supply has also taken a hit on the company’s production for first-quarter 2021. NIO—which currently carries a Zacks Rank #3 (Hold)— now anticipates to deliver 19,500 cars in the March-end quarter versus the prior guidance of 20,000-20,500 units. You can see the complete list of today’s Zacks #1 Rank (Strong Buy) stocks here.

Ford (F - Free Report) announced that it will build the new 2.5-litre Duratec hybrid engine at the Valencia Engine Plant in Spain in late 2022. The automaker further noted plans of investing additional 5.2 million euros in the plant in order to enhance battery pack assembly capacity. Investment of 5.2 million is in addition to the initial investment of the 24 million euros announced in January 2020. Meanwhile, the U.S. auto giant also introduced FORDLiive — a new connected uptime system that is set to enhance productivity of the company’s commercial vehicles via maximization of uptime. It is the first step in its long-term pursuit of achieving 100% operating uptime.

BorgWarner Inc. (BWA - Free Report) unveiled the Project CHARGING FORWARD at its Investor Day yesterday, per which the company plans to boost electric vehicles’ (EVs) revenues to around 45% of total revenues by 2030 from the current level of less than 3%. The CHARGING FORWARD plan represents an acceleration of the company’s electrification strategy. It encompasses facilitating its transition to electric light vehicles in a profitable manner and expansion in the electric commercial vehicles market, as well as streamlining BorgWarner’s combustion portfolio via disposal of businesses having revenues in the range of $3-$4 billion.

Winnebago Industries, Inc. (WGO - Free Report) reported second-quarter fiscal 2021 (ended Feb 27, 2021) adjusted earnings per share of $2.12, surpassing the Zacks Consensus Estimate of $1.39 and increasing from the year-ago level of 67 cents. This recreational vehicle maker reported revenues of $840 million for the quarter under review, outpacing the Zacks Consensus Estimate of $804 million. Moreover, the top line improved 34% year over year. Winnebago had cash and cash equivalents of $333 million as of Feb 27, 2021, up from $292.6 million on Aug 29, 2020. Long-term debt (excluding current maturities) totaled $520.3 million, slightly up from the $512.6 million recorded on Aug 29, 2020.

Toyota Motor Corporation (TM - Free Report) entered into a partnership with Isuzu Motors Ltd. and Hino Motors Ltd. in commercial vehicles aimed at addressing transport difficulties and achieving carbon neutrality. Per the terms of the deal, Toyota will acquire 39 million shares of truckmaker Isuzu’s common stock worth 42.8 billion yen. The three Japan-based companies are jointly setting up a new entity called Commercial Japan Partnership Technologies Corporation in Tokyo to promote their partnership, and plan for technology and services. Capitalized at 10 million yen, the new company will commence operations from Apr 1, 2021, and be 80% owned by Toyota, and 10% each by Isuzu and Hino.

Meritor, Inc. (MTOR - Free Report) received a grant of $15.9 million euros from the Advanced Propulsion Centre's Core Competition Program in the U.K.This will partially fund the company’s project for the development of the 17Xe electric powertrain system for heavy-duty electric trucks and buses integrated with a single-drive axle. Meritor, in association with Danfoss Editron and Electra Commercial Vehicles, submitted the Electric Powertrain Integration for heavy Commercial vehicles Project. The three companies are joining forces to develop a next-generation, zero-emission electric powertrain. 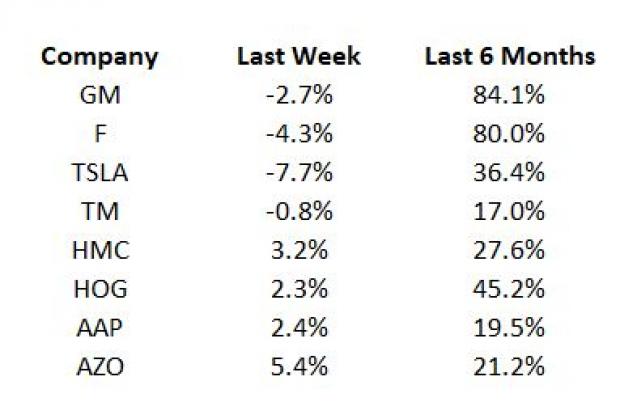 In the past six months, all stocks have increased, with General Motors being the maximum gainer. Last week’s price display is a mixed bag, with Tesla losing the most and AutoZone registering the highest gain.

Investors are keenly awaiting quarterly results of auto retailer CarMax, which is set to report on Apr 1, before the opening bell. Also, watch out for any updates related to chip crunch-related disruptions in the auto market.