Hasbro, Inc. (HAS - Free Report) recently announced partnership with online gaming platform — Roblox Corporation. Per the agreement, Hasbro will launch a range of Roblox-inspired NERF blasters along with The MONOPOLY: Roblox 2022 Edition board game. Following the announcement, shares of the company moved up 1.8% during trading hours on Apr 13.

The Nerf blasters will comprise various Roblox games such as ADOPT ME!, ARSENAL, JAILBREAK, MAD CITY, MURDER MYSTERY 2 and PHANTOM FORCES. Notably, the game comes along with a code, which upon redemption, enable buyers to upgrade to a virtual blaster. The company stated that it will launch the game in the United States, in the Fall season.

With respect to the launch, Adam Kleinman, Vice President, NERF Global Marketing, stated, “Our design teams have done a phenomenal job capturing the creativity and essence of Roblox creators and their most immersive, innovative Roblox games in NERF blaster form and we can’t wait to deliver these new items to Roblox fans around the world!”

Hasbro has a supreme gaming portfolio and is refining gaming experiences across a multitude of platforms like face-to-face gaming, off-the-board gaming and digital gaming experiences in mobile. During the fourth quarter, the company not only witnessed solid momentum in the toy and game market but recorded the fastest point-of-sale growth on Amazon in the United States and top European markets. Notably, the company witnessed solid performance in the gaming category, which includes MAGIC: THE GATHERING tabletop, MONOPOLY, DUNGEONS AND DRAGONS and many others, such as THE GAME OF LIFE, JENGA, CONNECT 4 and OPERATION.

Going forward, the company intends to launch the mobile version of MAGIC: THE GATHERING Arena by early 2021. It also has Spellslingers in the pipeline that is likely to be launched by Tencent in China. Other products like Peppa Pig and PJ Masks are in the pipeline.

So far this year, shares of the company have gained 6.9% compared with the industry’s 1.3% growth 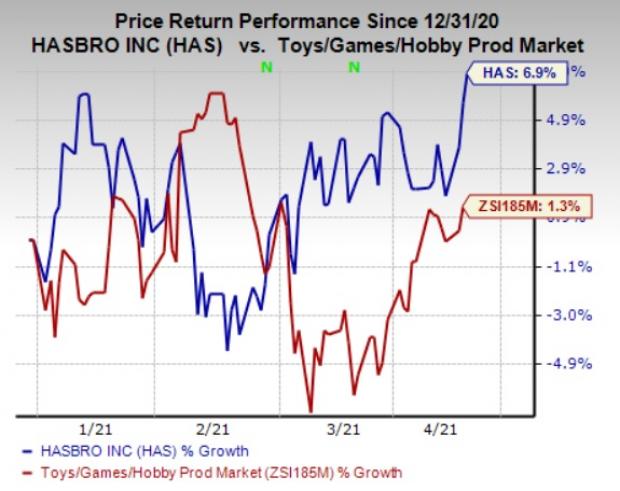 Mattel has a trailing four-quarter earnings surprise of 53.7%, on average.

TEGNA has three-five-year earnings per share growth rate of 10%.