Northrop Grumman Corp.’s (NOC - Free Report) business unit, Aerospace Systems, recently secured a modification contract to procure long-lead items and associated services, in support of the production and delivery of three E-2D Advanced Hawkeye aircraft for the government of France. Work related to the deal is expected to be completed by April 2027.

Valued at $99 million, the contract was awarded by the Naval Air Systems Command, Patuxent River, MD. The majority of the task will be carried out in Syracuse, NY, and El Segundo, CA.

Hawkeye is an airborne, all-weather, tactical, early-warning aircraft used by the U.S. Navy. E-2D is the fourth version of the E-2 Hawkeye. Notably, the E-2D Advanced Hawkeye has a structurally distinctive design — a rotating rotodome along with four vertical stabilizer tail configurations — which provides 360-degree surveillance at all times. These technologies fitted in this aircraft increase its visibility on faraway targets.

The French Navy has been operating Northrop Grumman's E-2C Hawkeye since 1998 and is the only country other than the United States to operate its E-2 Hawkeyes from an aircraft carrier. Earlier in January 2021, the government of France signed a Letter of Offer and Acceptance (LOA) with the U.S. government and showed its intent to purchase the E-2D Advanced Hawkeye. The latest deal will notably enable Northrop Grumman to strengthen its existing position in France.

In recent times, the importance of military aircraft in the U.S. aerospace-defense market has gained significant traction. This upside can be attributed to advancements and integration of new tactical and logistical features along with the inclusion of improved radar systems and the availability of advanced system engineering services. As the E-2D Hawkeye aircraft is a significant defense program for the government of the United States, we can expect more contract inflows like the latest one in the near future. These, in turn, should further bolster the Aerospace segment’s top line in the coming days.

The current U.S. administration recently presented the President’s FY 2022 discretionary funding request for the Department of Defense to Congress. The administration has asked for $753 billion in national security funding, reflecting an increase of 1.6% that includes $715 billion for the Defense Department. Such solid budgetary amendments, if approved, should enable Northrop Grumman to procure more significant contracts related to military aircraft, like the latest one.

In the past three months, Northrop Grumman’s shares have gained 15.9% compared with the industry’s 14.6% growth. 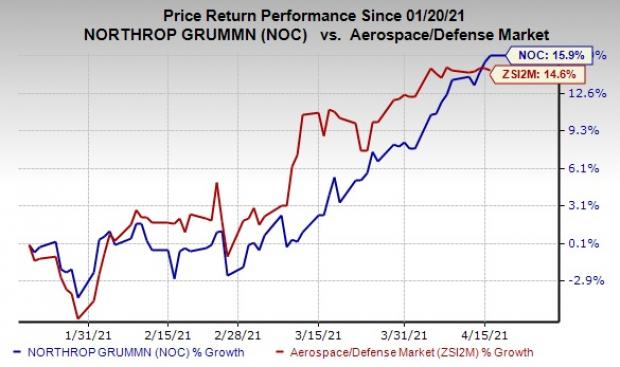 Ahead of Intel's (INTC) Q1 Earnings: CCG & DCG in Focus