After being battered throughout 2020 due to the coronavirus-induced declining passenger revenues, U.S. airlines have been benefiting from the improvement in air-travel demand (particularly on the leisure front) this year. The betterment was well-reflected in the first-quarter 2021 results of most airline players. While earnings announcement is over for almost all U.S.-based airline stocks, a handful few like Allegiant Travel Company (ALGT - Free Report) are yet to report. 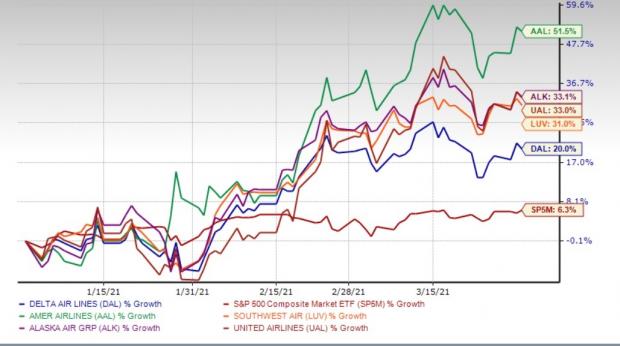 Southwest Airlines also incurred a narrower-than-expected loss per share in the March quarter. Additionally, JetBlue Airways’ (JBLU - Free Report) first-quarter 2021 loss (excluding 70 cents from non-recurring items) of $1.48 per share compared favorably with the Zacks Consensus Estimate of a loss of $1.62. Moreover, JetBlue’s loss per share was narrower than the loss of $1.53 incurred in fourth-quarter 2020.

Focus of the airlines on cargo revenues also boosted the top lines of most carriers in the March quarter. Evidently, cargo revenues surged 88.3% year over year to $497 million at United Airlines. At American Airlines, the same soared in excess of 100%.

With air-travel demand recovering and airlines looking to cut costs, the picture with respect to cash burn also seems encouraging. Evidently, at Delta, average daily cash burn turned positive in March with cash generation being $4 million per day in the month.

With more and more Americans getting inoculated each day, people might increasingly resort to air travel without the fear of infection. This should further hike air-travel demand.

The scenario also bodes well for the U.S. airlines with summer around the corner. Driven by an enhanced air-travel scenario, many U.S. carriers announced plans to broaden their networks to include their favorite tourist spots, thereby anticipating a spike in demand during the upcoming months.

Expecting the currently bullish scenario to continue, some airlines while releasing their first-quarter results issued encouraging outlooks too. Per Delta’s CEO Ed Bastian, “If recovery trends hold, we expect positive cash generation for the June quarter and see a path to return to profitability in the September quarter as the demand recovery progresses." Moreover, Southwest Airlines’ management estimates average core cash flow to either break even or turn positive by June. JetBlue expects to reach a breakeven point in the third quarter of 2021 on an EBITDA basis.

Trimble (TRMB) to Report Q1 Earnings: What's in the Cards?