II-VI (IIVI) to Report Q3 Earnings: What's in the Offing?

The company delivered impressive results in the last four quarters, with an earnings beat of 83.68%, on average. Notably, its reported earnings of $1.08 in the prior quarter surpassed the Zacks Consensus Estimate of 92 cents by 17.39%.

In the past three months, shares of the company have declined 27.2% compared with the industry’s growth of 0.7%. 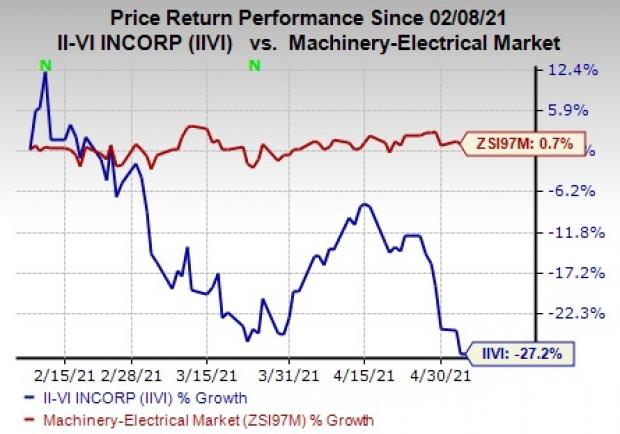 A few favorable factors — including increased use of autonomous and electric vehicles, 5G wireless deployments, the proliferation of cloud services, increased consumption of data and video due to the rising work-from-home culture, and adoption of 3D sensing — have been benefiting II-VI for the past few quarters. The trend is expected to have continued in the third quarter of fiscal 2021.

In addition, solid product offerings and zeal to innovate as well as businesses in various end markets are anticipated to have aided results in the quarter under review. Notably, the company unveiled multiple products — including VCSEL flood illuminator modules, Ceramic YAG technology platform and others — in the reported quarter. Also, its manufacturing capabilities and initiative to further expand are expected to have acted as added advantages.

Also, a solid backlog of $1.1 billion at the end of the second quarter of fiscal 2021 and healthy demand are likely to have contributed to the company’s performance in the to-be-reported quarter. Further, synergistic gains from the Finisar acquisition are anticipated to get reflected in fiscal third-quarter results.

However, any rise in the cost of goods sold, research and development expenses, and selling, general and administrative expenses is expected to get reflected in the to-be-reported quarter’s results. Notably, consolidated results for the first and second quarters of fiscal 2021 suggest increase of 23.2% in costs of goods sold, 13.4% in research and development expenses, and 0.6% in selling, general and administrative expenses.

The Zacks Consensus Estimate for fiscal third-quarter revenues is pegged at $773 million, suggesting a 23.3% increase from the year-ago quarter’s reported number and a 1.8% decline from the last reported quarter.

The Zack Consensus Estimate for the company’s fiscal third-quarter earnings is pegged at 88 cents per share, which indicates an increase of 87.2% from the year-ago quarter’s reported figure and an 18.5% decline from the previous quarter’s reported number.

Our proven model conclusively predicts an earnings beat for II-VI this time around. The combination of a positive Earnings ESP and a Zacks Rank #1 (Strong Buy), 2 (Buy) or 3 (Hold) increases the odds of an earnings beat. The case with II-VI is shown below. You can uncover the best stocks to buy or sell before they’re reported with our Earnings ESP Filter.

Here are some other companies you may want to consider as these also have the right combination of elements to post an earnings beat this time around.

The Middleby Corporation (MIDD - Free Report) currently has an Earnings ESP of +0.39% and is a Zacks #2 Ranked player. You can see the complete list of today’s Zacks #1 Rank stocks here.