Novavax, Inc. (NVAX - Free Report) incurred a loss of $3.05 per share in the first quarter of 2021, much wider than the year-ago quarter’s loss of 58 cents, and also falling short of the Zacks Consensus Estimate of a loss of $2.65 per share. This significant loss was due to higher costs to support the development of NVX-CoV2373, its COVID-19 vaccine candidate.

Revenues in the quarter were $447 million, marking a huge improvement from $3 million reported in the year-ago quarter. Revenues increased due to services performed under the agreement with the Coalition for Epidemic Preparedness Innovations and participation in the U.S. government’s Operation Warp Speed in relation to the clinical development of NVX-CoV2373. Revenues beat the Zacks Consensus Estimate of $292 million.

Novavax’s shares were down 12.9% in after-hours trading on Monday. The stock has rallied 43.9% this year so far against the industry’s decrease of 5.2%. 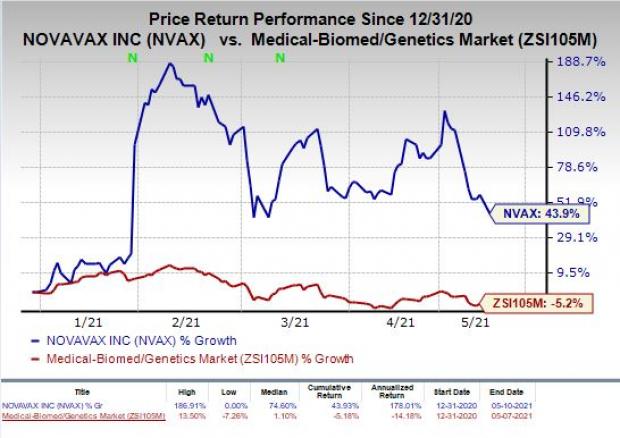 The company announced that it plans to file for authorization in the United States, United Kingdom and the EU in the second quarter of 2021 has been delayed to the third quarter. This was the reason for the stock to do down in after-hours trading despite better-than-expected sales in the quarter.

In the reported quarter, research and development expenses were $593 million, significantly up from $17 million in the year-ago quarter, due to higher expenses for the development of NVX-CoV2373 and higher employee-related costs.

General and administrative expenses also rose significantly year over year to $63 million due to higher employee-related and stock-based compensation expenses, as well as costs for supporting NVX-CoV2373’s development.

NVX-CoV2373 is currently being evaluated in a phase III study. In March 2021, Novavax announced final data from a pivotal phase III study which evaluated NVX-CoV2373 in the United Kingdom. Data from the same showed that the vaccine was 96.4% effective against mild, moderate and severe disease caused by the original coronavirus strain in the United Kingdom.

The company also announced results from the complete analysis of its phase IIb study in South Africa. In the region marked by a vast majority of strains that are B1.351 escape variants, the vaccine candidate delivered 55.4% efficiency among the HIV-negative study participants.

Meanwhile, Novavax is conducting the phase III PREVENT-19 study, which is evaluating the efficacy, safety and immunogenicity of NVX-CoV2373 in the United States and Mexico. The study has enrolled 30,000 participants, with final data from the same expected in the second quarter of 2021. The company has also commenced pediatric expansion of the PREVENT-19 study, to investigate the safety, efficacy and immunogenicity of NVX-CoV2373 in adolescents in the United States.

In March 2021, Novavax, reached an agreement in principle Glaxo (GSK - Free Report) and the U.K. government’s vaccines taskforce, to support manufacturing of up to 60 million doses of NVX-CoV2373, for use in the United Kingdom. Glaxo will provide “fill and finish” services for the same.

Novavax will file a biologics license application to the FDA shortly, seeking an accelerated approval for NanoFlu.

Please note that Novavax is also looking to explore a combined NanoFlu/NVX-CoV2373 vaccine, which can be used in a post-pandemic scenario. The company plans to begin clinical study on this combo later in 2021 after pre-clinical data showed that NanoFlu+NVX-CoV2373 induced protective responses against both influenza and SARS-CoV-2.