JetBlue Airways (JBLU - Free Report) was also featured in news, courtesy of its decision to start flying to London later this year. Meanwhile, Ryanair Holdings (RYAAY - Free Report) announced its intention to start flights on the Teesside (United Kingdom)-Faro (Portugal) route from Jun 16. This airline too grabbed headlines last week due to its lackluster fiscal fourth-quarter fiscal 2021 results. The European carrier’s fiscal fourth quarter were covered in detail in the previous week’s writeup.

1. Southwest Airlines, currently carrying a Zacks Rank #3 (Hold), expects average core cash burn in the $1-$3 million band per day for the current quarter. The metric was $6 million a day in April. The projection is better than the previous estimate of the metric, which was in the $2-4 million range. Notably, the average core cash burn excludes changes in working capital. The company still expects to achieve a breakeven average core cash flow or better in June 2021. Management further stated that operating revenues, which declined approximately 42% in April 2021 from its April 2019 levels, improved from the March reading owing to better leisure travel demand. The company is also currently witnessing improvements in travel demand and bookings for business.

2. JetBlue intends to start operating daily flights from New York’s John F. Kennedy International Airport to London’s Heathrow Airport from Aug 11, 2021 and to London’s Gatwick Airport on Sep 29, 2021.  However, the airline’s highly-awaited service between Boston Airport and London is delayed. Service on that route will commence in summer 2022.

3. Management at Alaska Air expects cash flow from operations for the June quarter in the $550-$650 million range. This represents an improvement from the previous expectation in the $450-$550 million band. Further, management stated that better-than-expected cash inflows from the carrier’s affinity card partner and its receipt of additional funds, courtesy of the second round of the Payroll Support Program, also contributed to this bullish cash flow projection. However, the company still expects second-quarter 2021 revenues to decline in the 32-37% band from the figure reported in second-quarter 2019. Capacity projection for the June quarter is also reaffirmed at a roughly 20% decline from its second-quarter 2019 actuals. Load factor view (% of seats filled with passengers) is retained in the 70-75% band.

4.Following the United Kingdom’s green list announcement, which allows England residents to visit certain countries (including Portugal) without having to quarantine on their return, Ryanair aims to start operating flights from Teesside to Faro, Portugal as part of its UK Summer 2021 Schedule. From Teesside, the carrier intends to begin services to Alicante and Palma de Mallorca in Spain this June, and to Corfu, Greece in July.

5. Delta Air Lines (DAL - Free Report) expands operation to Iceland with a second flight launched recently, which connects Boston, MA with Reykjavik. Earlier this month, the airline resumed its daily service to Iceland from New York-JFK after the country reopened its borders to U.S. travelers.

Amy Martin, Delta’s managing director, International Network Planning, stated, “As the first European country to reopen to U.S. tourists, we’ve seen increased demand for travel to Iceland this summer versus 2019.” In response to this demand uptick, the carrier will begin a third flight to Iceland from Minneapolis, MN this week. 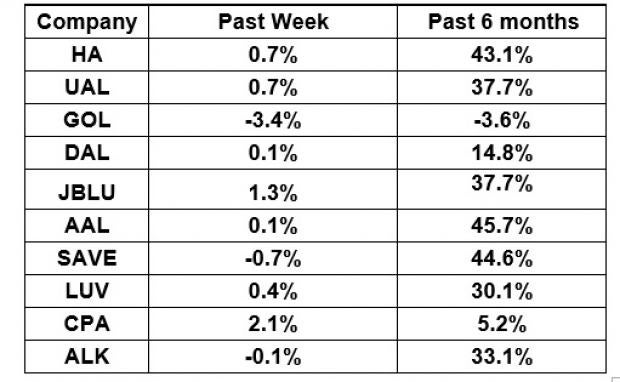 Here's Why Should You Hold Aflac (AFL) in Your Portfolio?