HSBC Holdings (HSBC - Free Report) is finally set to sell its unprofitable French retail bank to the United States-based private equity firm, Cerberus Capital Management. The sale process, which began almost 18 months ago, will finally end as the deal is expected to be announced in the coming days, according to people familiar with the matter, who asked not to be identified as the matter is private.

After conducting a review of the unit and finding it to be unprofitable, HSBC had been trying to do away with the business for a long time now. It was working with Lazard (LAZ - Free Report) to find a prospective buyer for its 270 branches in France. However, in September 2020, HSBC announced that it wasn’t being able to garner sufficient interest for the unit because of large-scale restructuring and complicated regulatory requirements, and, hence, might have to incur losses on the sale.

Nonetheless, the transaction has now been agreed upon. Notably, the sale is part of HSBC’s transformation plan announced in February 2020, which is aimed at reshaping underperforming businesses, simplifying complex organization and reducing costs.

As part of the transformation, the bank plans to scale back operations in Europe and North America, and focus more on the profitable Asia region, where it is likely to face competition from Credit Suisse Group (CS - Free Report) and UBS Group AG (UBS - Free Report) . Also, HSBC is mulling to sell its unprofitable U.S. retail banking business.

And, with the French retail business employing around 3,000 workers, the divestiture of the same is a step in the direction.

So far this year, shares of HSBC have gained 19.2% compared with 21.2% growth recorded by the industry it belongs to. 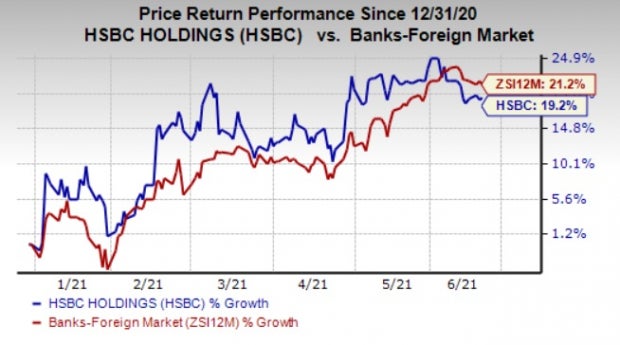