On the news front, U.S. auto bigwigs General Motors (GM - Free Report) and Ford (F - Free Report) provided updates on their electric vehicle (EV) strides. While General Motors made headlines by entering into an alliance with Wabtec Corporation and boosting e-mobility investment plans, Ford’s decision to acquire Electriphi and electrify the entire Lincoln fleet by 2030 generated buzz. On the flip side, the two automakers also issued safety recalls. Ford issued recalls for select 2021 super duty vehicles over defective front axles. The recall affected 17,616, 1,779 and 231 vehicles in the United States, Canada and Mexico, respectively. General Motors will recall more than 282,000 new vehicles over an airbag warning light failure. The affected vehicles were manufactured in 2021 itself, and include the Buick Envision, Cadillac CT4 and CT5, Cadillac Escalade and Escalade ESV, Chevrolet Corvette, Suburban and Tahoe, and GMC Yukon and Yukon XL.

General Motors announced its decision to enter into a partnership with Wabtec for developing and supplying the Ultium battery technology and Hydrotec hydrogen fuel cell systems for Wabtec freight locomotives. The U.S. auto giant — which is pulling out all the stops to demonstrate its EV prowess — also boosted electric and driverless investment to $35 billion through 2025, up from $27 billion proposed in November 2020. Part of the additional investment would be allocated toward the establishment of two new battery plants. General Motors plans to set up two new battery cell manufacturing plants in the United States by mid-decade, in addition to facilities in Ohio and Tennessee.

Ford announced that it is set to acquire Electriphi, a California-based start-up providing battery management and fleet monitoring software for EVs. The acquisition is likely to conclude this month. With the takeover, Electriphi will be integrated into the newly-established Ford Pro global business unit, which is committed to redefining the market for commercial vehicles and services. Meanwhile, the automaker projects second-quarter 2021 adjusted EBIT to surpass expectation and be significantly better than the year-ago period. In a separate development, Lincoln — Ford’s luxury marque — announced plans to transit half of its sales to carbon-free vehicles by mid-decade and electrify the entire portfolio of vehicles by 2030.

Lithia Motors (LAD - Free Report) reported record revenues of $2.1 billion for the month of May 2021. Total revenues for May 2021 surged 89% and same-store sales increased 26% from the pre-pandemic 2019 levels. The top line skyrocketed 104% and total same-store sales jumped 42% from the same period last year. The auto retailer also announced the acquisition of five dealership locations across Texas. The buyout is anticipated to add $350 million in combined annualized revenues. The takeover also raises the automotive retailer’s total revenues acquired to a whopping $7.5 billion annually, since the rollout of its five-year plan. 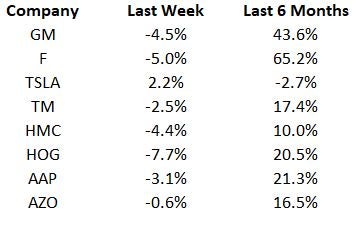 Industry watchers will keep a tab on May commercial vehicle registrations, to be released by the ACEA this week. Also, investors are awaiting the quarterly results of Winnebago (WGO - Free Report) and CarMax (KMX - Free Report) , which are scheduled to report this week.

4 Stocks to Make the Most of a Rebounding Restaurant Industry