Eni S.p.A. (E - Free Report) recently announced a significant hydrocarbon discovery in the Southern North Sea. The Italian energy major, through its subsidiary Vår Energi, has discovered oil and gas in the production license PL027. While Vår Energi has a 90% stake in the license, private oil and gas producer Mime Petroleum holds the remaining interest.

Eni made the commercial discovery in the King and Prince exploration wells in the Balder region, close to existing infrastructures. This can help the company reduce production cost at the site, thanks to potential tie-in options. The wells are drilled 3 kilometers west of the Ringhorne platform.

Water dept at the site is 128 meters. The new find is expected to enable the company to further boost development of the Balder Area. Notably, this is the fifth significant find by Vår Energi in 2021. The preliminary estimates of the discovery are pegged at 60-135 million barrels of recoverable oil equivalent. The companies associated with the project intend to reduce the time required to put the discovery to production.

The new discovery in PL027 will likely ramp up Eni’s activities in the Norwegian Continental Shelf. Its constant efforts to expand upstream operations will go a long way in generating growth. The company has recorded massive production growth in the past few years. Moreover, the start-up of key upstream projects is expected to enable it to achieve a compound annual growth rate of 4% from 2021 through 2024.

Eni’s shares have increased 0.5% in the past three months compared with 1.5% rise of the industry. 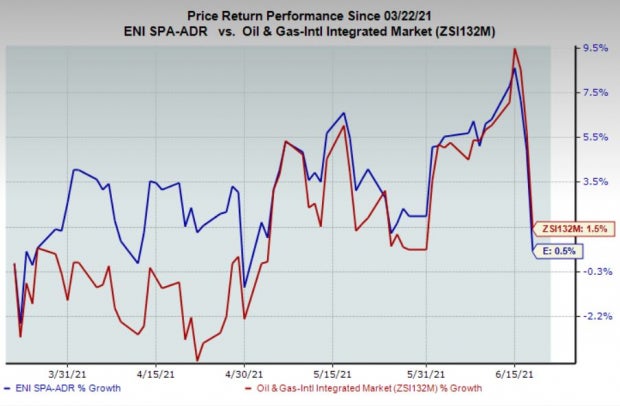 The company currently has a Zacks Rank #4 (Sell). A better-ranked player in the energy space is PHX Minerals Inc. (PHX - Free Report) , having a Zacks Rank #2 (Buy). You can see the complete list of today’s Zacks #1 Rank (Strong Buy) stocks here.