Celanese Corporation (CE - Free Report) has announced that it has acquired a certain technology linked with the production of polyacetal (POM) products, from Grupa Azoty S.A. of Tarnow, Poland, after the latter decided to discontinue its POM manufacturing. The takeover is expected to conclude in early July 2021.

Per the transaction, Celanese will acquire all existing Tarnoform contracts to cater to Azoty’s customers. However, the terms of the transaction do not include the transfer of any of Azoty’s employees, tangible assets, manufacturing units or sales offices. Nevertheless, this comes with the exception of certain equipment transfers falling in the purview of intellectual property transfer.

Celanese noted that the takeover will enable it to offer its assets to Azoty’s customers, thereby creating room for volume increment and opening doors to an established POM customer base and POM technology in Tarnoform. Its Engineered Materials business is a pivotal lever of growth and this particular acquisition will fuel the success of the business unit.

Shares of Celanese have soared 79.3% in a year against the industry’s decline of 14.1%. The estimated earnings growth rate for the company for the current year is pegged at 71.2%. 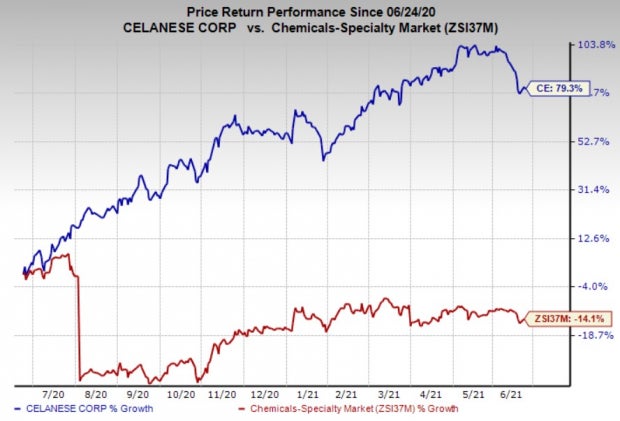 The company, in its last-quarter earnings call, stated that demand for its Engineered Materials and Acetyl Chain products remains strong in most end markets. It expects adjusted earnings of roughly $4.00 per share, for the second quarter, factoring in current industry dynamics, higher inventory costs from Uri and minimal turnaround requirements. Moreover, Celanese now expects adjusted earnings of $12.50-$13.50 per share for 2021.

Olin has a projected earnings growth rate of 506.7% for the current year. The company’s shares have surged 278.7% in a year.

Tronox has a projected earnings growth rate of 242.9% for the current year. The company’s shares have seen a jump of 190.8% in a year.

Univar has a projected earnings growth rate of 35.2% for the current year. The company’s shares have grown 49% in a year.