Catalent (CTLT) to Enhance Its Portfolio via RheinCell Buyout

Catalent, Inc. (CTLT - Free Report) recently reached an agreement to acquire RheinCell Therapeutics GmbH, which is expected to close before the end of 2021, subject to customary conditions. Financial details of the transaction have been kept under wraps.

For investors’ note, RheinCell is a developer and manufacturer of GMP-grade human-induced pluripotent stem cells (iPSCs). The buyout will enable Catalent to offer the building blocks to scale iPSC-based cell therapies as well as reduce entry barriers to the clinic for therapeutic companies.

The completion of the buyout is expected to help Catalent significantly strengthen its foothold in the global Cell and Gene Therapy business. Notably, the business is a component of the company’s broader Biologics segment.

Catalent’s existing custom cell therapy process development and manufacturing capabilities are expected to get a significant boost via the buyout with proprietary GMP cell lines for iPSC-based therapies. iPSCs, which are cells that can be differentiated into various cell types, can be utilized to address a variety of therapeutic indications.

Per Catalent’s management, the provision of a renewable and standardized source of cells for further product development in the form of iPSCs can potentially turn out to be a disruptive technology. This technology could further propel the development of the next generation of cell therapies, thereby substantially enhancing the manufacturing ability at scale.

Per a report by The Business Research Company, the global cell and gene therapy market is expected to grow from $6.69 billion in 2020 to $17.32 billion in 2025 at a CAGR of 21%. Factors like increasing incidences of cancer and other chronic diseases, and rising number of clinical trials are likely to drive the market.

Given the market potential, the latest buyout is expected to significantly strengthen Catalent’s global business.

Of late, its enormous market prospect is making the cell and gene therapy market a happy hunting ground for its industry bigwigs. Recently, another renowned player in this space, PerkinElmer, Inc. (PKI - Free Report) , inked a deal to acquire SIRION Biotech GmbH. The latest buyout is likely to be an important addition to PerkinElmer’s growing cell and gene therapy research and development activities.

Other Notable Deals of Catalent

Of late, Catalent has entered into a few strategic deals across its businesses.

The company, in May, announced that it has begun a global innovation partnership with Norwegian biotech company Hofseth BioCare ASA to develop a delayed-release formulation of HBC’s OmeGo fish oil.

In April, the company partnered with gene therapy company AavantiBio to support the development and manufacturing of the latter’s gene therapies, including its lead program in Friedreich’s Ataxia. 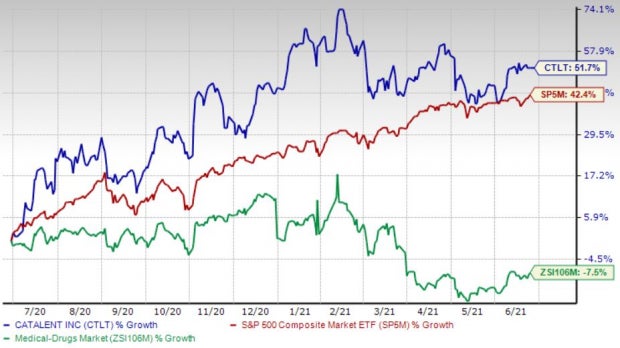 Here's Why You Should Retain ADP Stock in Your Portfolio