The company is based in Pittsburgh, PA, and has a market capitalization of $14.6 billion. It presently carries a Zacks Rank #2 (Buy).

In the past three months, the company’s shares have gained 8.3% as compared with the industry’s growth of 2.8%. 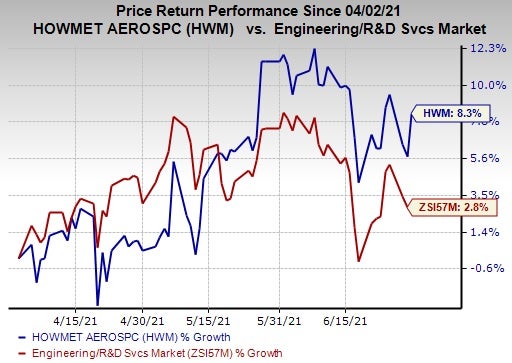 There are a number of factors that are influencing Howmet Aerospace’s prospects. A brief discussion on important factors and earnings estimates is discussed below:

Financial Projections: Howmet Aerospace is well-poised to gain from solid offerings and focus on innovation. Also, it has an effective pricing policy and works on cost-saving actions, with structural cost-saving yielding benefits of $61 million in the first quarter of 2021.

For 2021, the company increased its projections for earnings (excluding special items) to 91 cents to $1.02 per share from the previously stated 75-89 cents. The revised mid-point is at 95 cents, higher than 80 cents mentioned previously. Earnings in the second quarter are expected to be 19-21 cents per share.

In the quarters ahead, Howmet Aerospace anticipates benefits in the industrial gas turbine market to be driven by the rising demand for cleaner energy. Also, business in commercial transportation is expected to be healthy.

For 2021, the company anticipates revenues of $5.05-$5.20 billion versus the earlier mentioned $5.05-$5.25 billion. The mid-point of the revised as well as the earlier range is pegged at $5.1 billion. Also, the company believes that revenues for the second half of 2021 will be 12% higher than that reported in the first half.

Capital Allocation: The company uses parts of its capital to manage its leverage position. Till May 2021, the company repaid $840 million of its debts. This, in turn, is expected to lower interest expenses by 38 million in 2021. Cash generation is expected to be positive in the remaining quarters of 2021. Notably, the company increased its adjusted free cash flow projection to $390-$460 million from the earlier $350-$450 million.

As regard to returning value to its shareholders, the company intends on using part of its capital to buy back shares under its accelerated share-repurchase program. It also wants to reinstate quarterly dividend payments in the third quarter of 2021.

Q2 Headwinds: The company expects revenues of $1.17-$1.23 billion for the second quarter of 2021. The mid-point ($1.2 billion) of the projection is lower than $1.3 billion in revenues generated in the year-ago quarter.

The quarterly performance is expected to face headwinds from supply-chain issues (related to part shortages like semiconductors) in the commercial transportation market. Also, commercial aerospace revenues are predicted to decline year over year.

High Debts: Huge debts and weak abilities to repay financial obligations, as suggested by selected ratios, are expected to be concerning for Howmet Aerospace. The company’s long-term debts were $4.2 billion at the end of first-quarter 2021, while it expended $72 million on interest charges in the same quarter. The company expects interest expenses of $270 million for 2021.

Earnings Estimate Revisions: Howmet Aerospace’s earnings estimates have increased in the past 60 days. Currently, the Zacks Consensus Estimate for earnings is pegged at 98 cents for 2021 and $1.53 for 2022, reflecting growth of 6.5% and 5.5% from the respective 60-day-ago figures.

Notably, there were three positive revisions in earnings estimates for 2021 in the past 60 days, whereas two hikes were recorded for 2022 estimates.

Other Stocks Worth Considering in the Industry

In the past 60 days, earnings estimates for the stocks have improved for the current year. Further, earnings surprise for the last reported quarter was 21.17% for Jacobs Engineering, 60.00% for ChampionX and 329.41% for Atlas Technical.