The sequential decline in June was primarily due to coronavirus outbreak in Guangdong Province, which resulted in border restrictions and compulsory quarantine rules for visitors arriving from parts of Shenzhen, Guangzhou and Foshan.

Although visitation is likely to improve gradually in the coming months, it is expected to take time to attain the pre-pandemic levels. However, with an increased focus on streamlining cost structures along with optimization of business processes, the industry on a whole has shown some resilience.

Although majority of the casinos have reopened with safety protocols, gaming revenues are below the pre-pandemic levels. In such a scenario, companies are focusing more on iGaming business operations to generate online gambling revenues. 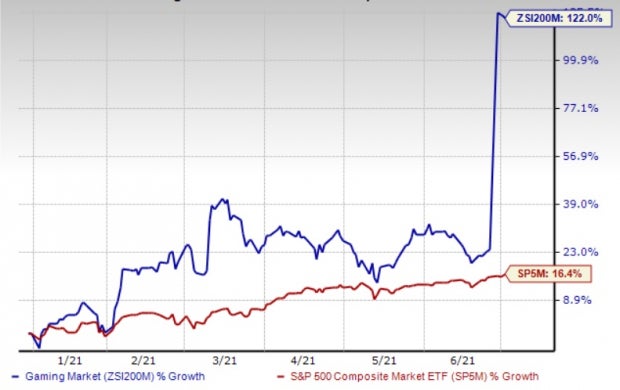 Macau Gaming Inspection and Coordination Bureau (“DICJ”) has increased gaming inspectors by more than double. The number of inspectors increased to 459 from 192. In the recent years, Macau has stiffened scrutiny of casinos to crackdown on corruption in China. This compelled Macau officials to impose restrictions on high rollers to stop billions of dollars from being siphoned off illegally from mainland China to Macau.

Earlier, the government had put withdrawal limit on each ATM transaction to stem the recent increase in overseas ATM withdrawals. While these policies might be helpful in the long run, they are likely to restrict gaming revenues in the near term. Moreover, Macau's DICJ is increasing its audits of the junket industry due to worries of money laundering. Markedly, junkets are responsible for about half the gaming revenue in Macau.