Nike (NKE - Free Report) had underperformed the market in 2021 until it posted blowout fourth quarter fiscal 2021 results on June 24. The sportswear giant’s stock price has surged 20% then to reach new highs. And NKE’s outlook is rather impressive.

The company’s margins climbed as its direct-to-consumer push gains momentum. Nike Direct sales pop 73% to $4.5 billion. “FY21 was a pivotal year for NIKE as we brought our Consumer Direct Acceleration strategy to life across the marketplace. Fueled by our momentum, we continue to invest in innovation and our digital leadership to set the foundation for NIKE’s long-term growth,” CEO John Donahoe said in prepared remarks.

Nike’s fiscal 2021 sales surged 19% to bounce back from its slightly-covid-hit FY20 that pushed sales down 4.4%. Last year’s top-line growth marked NKE’s best in decades—pulling in $44.54 billion—as it proves once again it’s the undisputed champion of the sports apparel and sneaker world, despite the rise of Lululemon (LULU - Free Report) and a resurgent Adidas (ADDYY - Free Report) in North America.

NKE continually ranks as one of the world’s most valuable brands alongside Coca-Cola (KO - Free Report) , McDonald’s (MCD - Free Report) , Apple (AAPL - Free Report) , and others. And it has thrived because of its ability to create trends, constantly adapt, and attach the Swoosh to the biggest sports, athletes, and cultural icons. 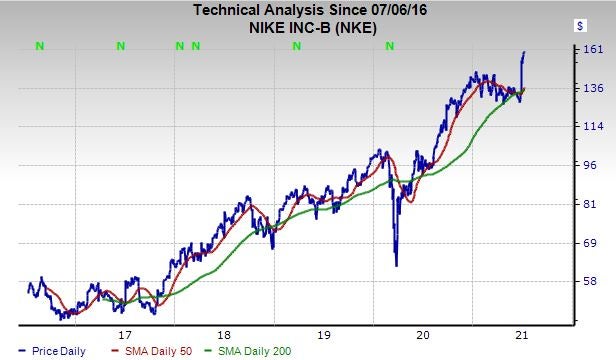 Nike has invested in the future through multiple shopping apps and an impressive digital marketplace that spans from its own websites to social media platforms where people shop directly. The firm has also spent to digitalize its supply chain, including through acquisitions, in order to be more predictive.

The company’s supply chain and shipping setbacks in Q3, driven by broader global congestion, don’t appear to be hindering the firm anymore. Zacks estimates call for NKE’s revenue to jump 12% in FY22 and another 10.3% higher in FY23, both of which would mark its strongest top-line expansion since 2012.

The sportswear giant’s adjusted EPS figures are projected to climb by over 18% in both FY22 and FY23. Nike has also consistently beaten our bottom-line estimates and its longer-term consensus earnings estimates have surged since its report on the back of solid guidance.

NKE, which was down in 2021, has soared 20% since its release to hit fresh records of over $160 a share on Tuesday. Nike is now up 185% in the last five years to blow away its industry and top the S&P 500’s 120% run. And despite sitting at records, NKE trades over 20% below its own year-long highs at 37X forward 12-month earnings, which also marks a discount to its median.

Nike’s strong post-release EPS revisions help it grab a Zacks Rank #1 (Strong Buy), alongside an “A” grade for Momentum in our Style Scores system. NKE could face a near-term pullback given its huge run.

Still, long-term investors might want to consider the stock since 16 of the 21 brokerage recommendations Zacks has are “Strong Buys,” with none below a “Hold.” Nike also pays a dividend and it resumed buybacks last quarter.