That railroads in the United States got a new lease of life from the improved freight environment is no longer news. With ramped-up vaccination programs and the resultant relaxation of restrictions, economic activities in the country are gathering pace. Naturally, with more goods being transported across the United States, railroads are being well-served. 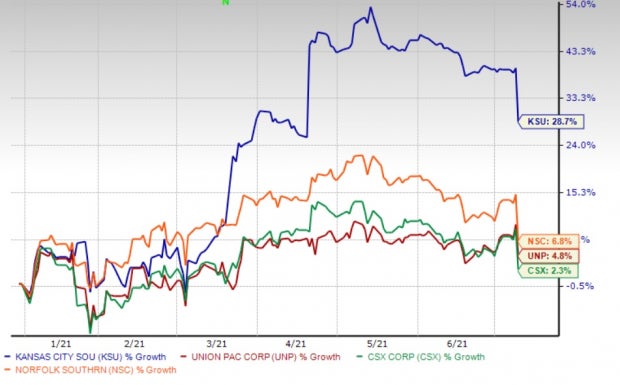 Despite the signs of betterment witnessed year to date, stocks of the above operators declined in yesterday’s trading. Let’s delve deeper to unearth the reasons for this southward movement.

Regulatory pressure from the Biden regime, aimed at curbing monopolistic trends by increasing competition in the railroad space, induced this decline. The U.S. administration reportedly intends to direct the Federal Maritime Commission and the Surface Transportation Board (STB), through an executive order to firmly deal with consolidation and unfair pricing in the ocean shipping and railroad industries.

The government is concerned about the malpractice of companies in the above fields that sees them charging unreasonable fees due to presence of only a handful of players. Biden aims to lower costs for consumers, which are currently exorbitant due to the anti-competitive landscape prevalent in the rail and shipping spaces.

The news of the Biden administration’s worry about the level of consolidation in the railroad space hit Kansas City Southern, currently carrying a Zacks Rank #3 (Hold), the most. Consequently, the Kansas City, MO-based railroad operator declined 7.87% on Jul 8 to $262.79. This sharp decline can be attributed to Kansas City Southern’s possible acquisition by Canadian National Railway Company (CNI - Free Report) next year.

The executive order is likely to make it tougher for the deal to materialize as the application would be subject to more intense scrutiny by the STB. We remind investors that Canadian National had outbid another Canadian railroad operator, namely, Canadian Pacific Railway Limited (CP - Free Report) in its quest for Kansas City Southern.

Although not hit as hard as Kansas City Southern but shares of other U.S. railroads fell on Jul 8 following the update. Stocks of CSX, Union Pacific and Norfolk Southern dropped 6.16%, 4.38% and 7.16%, respectively. As a result, the Dow Jones U.S. Railroads Index decreased 5.67% in yesterday’s trading.

Per the report, railroad operators currently enjoy a monopoly in certain corners of the United States where the available freight tracks belong to them.. The executive order will encourage STB to act on the reciprocal or competitive switching rule, which it had proposed way back in 2016. However, the STB suggestion was not accepted at that time, mainly due to opposition by the Association of American Railroads.

In the event of the rule materializing now, shippers served by a single railroad, can invite bids from a competing railroad if the latter’s service is available. In such a scenario, the competitor railroad may win the shipper’s business by offering a lower price, using the other railroad’s tracks. However, it will have to pay access fees to the main railroad.

That the Association of American Railroads is still opposed to the practice of reciprocal switching can be gauged from the statement of Ian Jefferies, chief executive of the railroad association, who on Jul 8 said: “Competition remains fierce across freight providers, and any proposal mandating forced switching would put railroads — an environmentally-friendly option that invests $25 billion annually in infrastructure — at an untold disadvantage."

Here's Why You Should Add MetLife (MET) to Your Portfolio