Shares of Axsome Therapeutics (AXSM - Free Report) plunged 10.4% on Jul 14, following the company’s announcement on Tuesday that the FDA had rescinded its Breakthrough Therapy designation for its cataplexy candidate, AXS-12. The candidate was granted the designation for cataplexy indication by the FDA last year.

The Breakthrough Therapy designation is granted to medicines being evaluated for serious conditions where early clinical evidence indicates the potential for substantial improvement over available therapy. This designation is designed to expedite the development and review of the candidate.

Please note that the company is developing AXS-12 for the treatment of cataplexy in narcolepsy patients. A phase III study is anticipated to begin in the third quarter of 2021.

The company stated that the FDA repealed the Breakthrough Therapy designation, following its approval to another drug, most likely Wakix, for treating cataplexy in narcolepsy patients. Last year, Harmony Biosciences’ (HRMY - Free Report) Wakix became the first and only non-scheduled treatment for this patient population. Popular drugs for treating cataplexy in narcolepsy patients include Jazz Pharmaceuticals’ (JAZZ - Free Report) Xyrem and Xywav. However, both are scheduled drugs with restricted availability.

The rescinding of the designation is likely to impact the development timeline of AXS-12. Also, availability of a new drug for cataplexy has increased the likelihood of strong competition for AXS-12, if and when it gets approved and launched. However, the candidate enjoys Orphan Drug designation in the United States.

Axsome has an exclusive license agreement with Pfizer (PFE - Free Report) for getting the non-clinical and clinical data on the latter’s reboxetine, the active pharmaceutical ingredient in AXS-12.

Shares of Axsome have plunged 30.3% so far this year compared with the industry’s decrease of 3.1%. 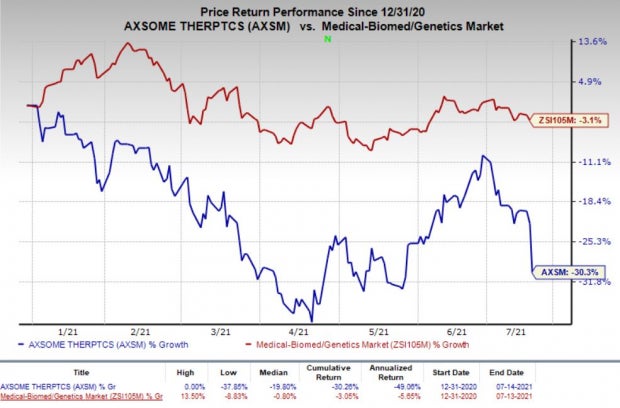 An NDA seeking approval for Axsome’s another candidate. AXS-05 as a potential treatment of major depression disorder, is under review with the FDA. A decision is expected by Aug 22, 2021. The company is making preparations to launch AXS-05, following a potential FDA approval. The candidate is also being developed for treating treatment-resistant depression, smoking cessation and agitation associated with Alzheimer's disease.

Axsome’s another lead candidate, AXS-07, is being developed for the acute treatment of migraine. The NDA for AXS-07 for the acute treatment of migraine is expected to be filed by the end of the second quarter of 2021. The company is planning to file a new drug application (NDA) for its another pipeline candidate, AXS-14, in the fourth quarter of 2022. The NDA will seek approval for the candidate as a potential treatment for management of fibromyalgia, a debilitating central nervous system disorder with limited treatment options.