While apprehensions associated with the pandemic persist, government’s two-pronged approach of stimulus package and stepped-up vaccinations are aiding consumer spending activity. Markedly, retail sales rebounded in June, after taking a dip in May. With the resumption in business activities and relaxation in coronavirus-induced restrictions, Americans flocked to restaurants and bars, bought apparels, spent on gasoline, and purchased electronics and appliance. The metric rose despite soft sales at auto dealers.

Although demand for big-ticket items and goods was heathy, consumers spent more on services and activities that were earlier restricted. With large number of Americans being inoculated and resuming active social lifestyle, demand for travel, leisure and entertainment as well as dining out has risen. We note that restaurants and bars is the only service category included in the retail sales data.

The Commerce Department stated that U.S. retail and food services sales in June rose 0.6% sequentially to $621.3 billion, following a revised reading of 1.7% decline in May. June sales results handily beat analysts’ estimates, stoking expectations of further robust economic expansion in the second quarter. Economists believe that GDP growth is likely to accelerate in the second quarter from 6.4% notched in the preceding quarter.

Let's take a look at category-wise sales on a month-over-month basis. 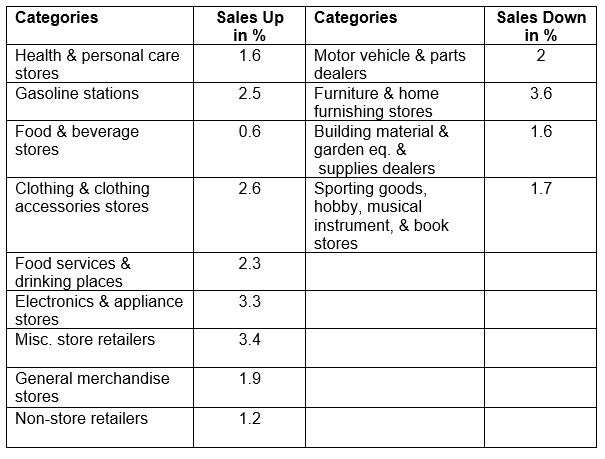 Remarkably, nine of 13 categories showed sequential growth, as consumers filled their shopping carts. We note that U.S. retail sales surged 18% from June last year. Sales at clothing & clothing accessories stores as well as food services & drinking places soared 47.1% and 40.2% year over year, respectively. There is growing eagerness among consumers to venture out and shop at stores.

Well, rebounding economy with more people returning to workplaces and households sitting on a large pile of savings are likely to result in higher spending. Retailers, particularly apparel, are expecting to make the most of the recovery in demand, making up for the sales lost last year due to the pandemic. However, rising inflation is hurting consumer sentiment to an extent.

We note that record households’ savings coupled with payments under the Child Tax Credit program to qualifying families running from July through December are likely to boost consumer spending. Again, a healing job market is acting as tailwind.