Last week, Delta Air Lines (DAL - Free Report) kicked off the second-quarter 2021 earnings season for the airline stocks. The carrier incurred a loss for the sixth successive quarter as the coronavirus-led weak air-travel demand induced a steep 53% fall in passenger revenues from the second-quarter 2019 (pre-coronavirus) levels.

However, owing to the improved air-travel demand scenario, loss in the second quarter of 2021 was narrower than expected. Revenues too surpassed the Zacks Consensus Estimate.

Traffic updates for the month of June from the likes of Allegiant Travel Company (ALGT - Free Report) and Copa Holdings (CPA - Free Report) were also available in the past week.

Despite the recent uptick in air-travel demand (particularly for leisure) in the United States as more and more Americans get vaccinated, the picture remains bleak when compared to the second-quarter 2019 scenario. Consequently, passenger revenues plunged 53% from the levels recorded in the comparable quarter of 2019 to $5,339 million.

Meanwhile, the improvement in air-travel demand in the United States can be gauged from the fact that 83.9% of the company’s second-quarter 2021 passenger revenues came from its domestic markets. Delta, currently carrying a Zacks Rank #3 (Hold), anticipates total September-quarter revenues to drop in the 30-35% range from third-quarter 2019 actuals.

2. American Airlines anticipates second-quarter total revenues to decline 37.5% from the level recorded in the comparable period of 2019. This is better than its previous guidance of a decrease of around 40%. It estimates available seat miles to fall 24.6% from the 2019 level.

The current projection comes within the range of 20-25% decline expected previously. The carrier expects to incur a net loss per share excluding net special credits in the range of $1.67-$1.76 for the second quarter.

3. Per an SEC filing, Alaska Air now anticipates capacity, measured in available seat miles, to decline 21% in the second quarter of 2021 from the level reported in the comparable period of 2019. Previously, the same was estimated to decrease approximately 20% from the 2019 actuals.

Revenue passengers are estimated to be down 28% from the second-quarter 2019 finals. The present forecast meets the lower end of the past guided range of around 28-30% decline.

For the June quarter, passenger load factor (percentage of seats filled with passengers) is estimated to be 77%, better than the previous expectation of 74-76%. With an uptick in passenger demand, Alaska Air now anticipates total revenues to drop 33% in the second quarter from the 2019 level. The current expectation touches the lower end of the previous forecast band of 33-35% decline.

4. Copa Holdings’  traffic, measured in revenue passenger miles (RPMs), tanked 45.6% from the 2019 levels (pre-pandemic) to 954.6 million in June 2021. In response to this low-demand scenario, the airline is reducing capacity.

Measured in available seat miles (ASMs), capacity plunged 41.4% from the 2019 levels to 1210.2 million. With air-travel demand bettering recently on increased vaccination drives, Copa’s traffic in June jumped 25.7% from the May reading.

With the traffic rise outweighing capacity expansion, load factor in June expanded 20.4 points to 77.7% from the year-ago period’s levels. For the total system (including scheduled service and fixed fee contract), Allegiant carried 88.2% more passengers in June 2021 from the June 2020 levels. 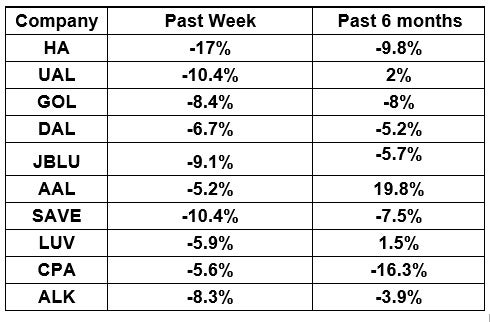 The table above shows that all airline stocks have traded in the red in the past week as concerns that the Delta variant of COVID-19 may hurt the recent uptick in air-travel demand gained pace.